THE FIRST EVER BILLY LOVES STU MEME FOR HORROR BLOGGERS 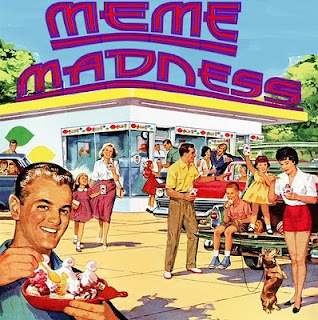 1: In Ten Words or Less, Describe Your Blog:
A: A site for fans of cinema's delicious underbelly.

4: You have been given an ungodly amount of money, and total control of a major motion picture studio - what would your dream Horror project be?
A: Stephen King's "It". It's black and white and 90 minutes long. It starts on that rainy night with Georgie's death at the hands of a child molester, then cuts to the present day when we gather the main characters who join forces to deal with the childhood fears that have haunted them forever. When it's time to face the creature in the sewer, it's only Georgie. This story, to me, has ALWAYS been about the death of childhood. THAT is scary.

5: What horror film "franchise" that others have embraced, left you cold?
A: "Saw" is obvious, but it's an honest answer.

6: Is Michael Bay the Antichrist?
A: No, just creatively bankrupt.

7: Dracula, The Wolf Man, The Frankenstein Monster - which one of these classic villains scares you, and why?
A: The Wolfman, 'cause he's us.

8: Tell me about a scene from a NON HORROR Film that scares the crap out of you:
A: The Large Marge scene in "Pee-Wee's Big Adventure" scared the shit out of me the first time I saw it.

9: Baby Jane Hudson invites you over to her house for lunch. What do you bring?
A: Earplugs.

10: So, between you and me, do you have any ulterior motives for blogging? Come, on you can tell me, it will be our little secret, I won't tell a soul.
A: To develop my writing and to communicate with other like-minded weirdos.

11: What would you have brought to Rosemary Woodhouse's baby shower?
A: A crucifix rattle.

12: Godzilla vs The Cloverfield Monster, who wins?
A: Godzilla. He's an unforgettable creature who's starred in 30 films. I can't even remember what the Cloverfield monster looked like. Plus radioactive breath pretty much trumps everything else.

13: If you found out that Rob Zombie was reading your blog, what would you post in hopes that he read it?
A: Dear Rob, Please leave "Halloween" alone and go back to the hellbillies.

14: What is your favorite NON HORROR FILM, and why?
A: "Rear Window" because it's cinematically perfect and I got caught up in it the first time I saw it more it than I'd ever been engaged in a flick before or since.

15: If blogging technology did not exist, what would you be doing?
A: Keeping volumes of creepy notebooks all to myself.

Dave, fantastic answers - thanks for playing! And your version of It sounds fascinating.

Thanks, Pax. And thanks for creating this meme. I'm a big fan of Billy Loves Stu!