My copy of Mondo Macabro's Mystics in Bali has just arrived. Opening the envelope it was shipped in, I realized just how much I enjoy exploring each and every Mondo Macabro release that finds its way into my hands. That standout red case, the images on the sleeve, the informative notes and the overall design make each disc something special. And that's not even taking into account the film that the case contains. Every single flick from "the wild side of world cinema" that MM presents seems carefully handpicked and labouriously restored to give the viewer the most complete and best looking version of the film possible. Even their sales reel is a thing of joy.

With all this in mind, here in order is a list of my favourite Mondo Macabro releases to date. Of course, I haven't seen them all (Mystics in Bali is still waiting for me to select "Play"), but I know something unique will be waiting for me when I do. 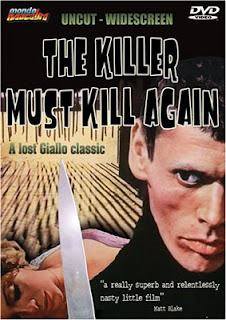 (Italy 1975)
DIR: Luigi Cozzi
STARRING: George Hilton, Christina Galbo, Michel Antoine
MM Description: Director Luigi Cozzi (Starcrash) made his debut with this dark and disturbing thriller, very much in the mold of his mentor Dario Argento. Although regarded as a classic by fans of Italian horror the film has been almost impossible to see for many years. This DVD is the first official US video release.

A rich womanizer (George Hilton) plans to murder his wife. He blackmails a man into doing the evil deed for him. The car with the murdered woman's corpse is stolen by a pair of joyriders. The vicious killer sets off in pursuit - with more than just murder on his mind.

Previously released in a cut, full screen version, this DVD returns the film to its original length and is presented in a digitally restored format, anamorphically enhanced for widescreen TV's.


DON'T DELIVER US FROM EVIL 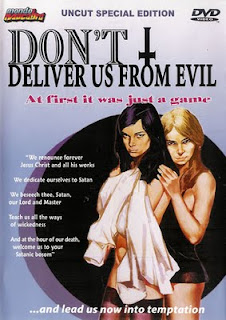 Influenced by their reading of forbidden books, they decide to explore the world of perversion and cruelty. They find a victim and use their innocent exterior to seduce and destroy him. Once they have stepped over the line, they find it impossible to stop.And soon they are contemplating the ultimate evil act.

Hugely controversial, the film was banned for blasphemy and has never been released in the US before. It's a film that should be viewed only by those with very open minds. 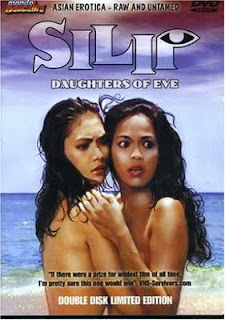 The film stars former Miss Philippines, the stunning Maria Isabel Lopez, in her most revealing role ever. It‘s an eye-opening example of raw and savage film making from one of its country’s most innovative directors.

Set in the beautiful and remote countryside of Ilongo, the story tells of three young women and their struggle to come to terms with their own sexuality against a background of religious repression and male brutality.

This film contains scenes of extreme violence and graphic sexuality that may disturb some viewers. 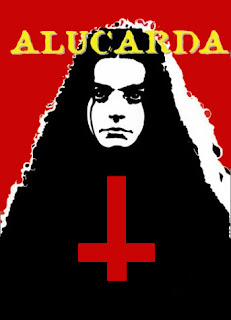 (Mexico 1975)
DIR: Juan Lopez Moctezuma
STARRING: Claudio Brook, Tina Romero, Suzanna Kamini, David Silva
MM Description: Directed in Mexico in 1975 by Jodorovsky collaborator Juan Lopez Moctezuma, the Psychotronic Video guide describes this film as, 'The strongest, most imaginative, and visual witch movie since Ken Russell's The Devils'. It tells of the strange relationship between two young girls, Justine and Alucarda, and how their relationship destroyed the lives of those around them in a torrent of blood, death and damnation. This legendary film contains images that will shock and disturb. 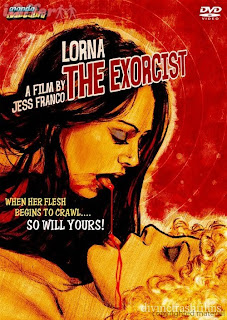 (France 1974)
Dir: Jess Franco
STARRING: Pamela Stanford, Guy Delorme, Lina Romay, Jacqueline Laurent, Howard Vernon
MM Description: Patrick, a rich businessman, celebrates his daughter Linda's 18th birthday by taking her and his wife to a famous casino resort in the south of France, where, 20 years earlier, he had won the money that enabled him to start his business and begin his rise to the top. At the casino he meets the beautiful and mysterious Lorna, whom he first encountered that night 20 years ago. She reminds him that he made a promise to her back then. She is the power behind his success and now she has returned to claim her reward - his daughter, Linda. A masterpiece of transgressive horror from Jess Franco. 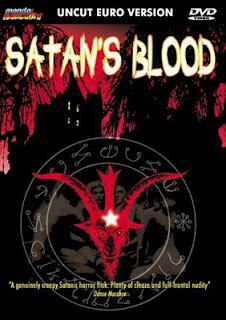 (Spain, 1978)
DIR: Carlos Puerto
STARRING: Angel Aranda, Sandra Alberti, Marian Karr
MM Description: Andy & Anna are bored and decide to go for a drive in the country. On the way they meet another couple who claim to know them from many years before. They agree to visit their country house and end up staying the night.

A simple game with a Ouija board goes badly wrong and the evening begins to turn into a nightmare. Things get worse when Anna is attacked by a mysterious stranger. When Andy goes to investigate he finds that they have strayed into the clutches of a dangerous pair of psychopaths who are planning for them a fate worse than death.

In the 1970's Spain, certain films were released with an "S" classification - S for Sex. These were films with an unusually high number of scenes of sex and sadism. Satan's Blood was one of the first - and still the most notorious. 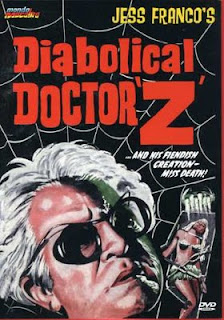 (France / Spain 1965)
DIR: Jesus Franco
STARRING: Estella Blain, Howard Vernon, Mabel Karr
MM Description: Dr Z creates a mind control machine. Rejected by the medical establishment as mad, he suffers a fatal heart attack. His daughter decides to take revenge on the men who did down her dad. Using his devious device, she brainwashes a sexy go-go dancer and turns her into a deadly killing machine. First she seduces her victims... then she dispatches them with her poison tipped finger nails. Mondo Macabro is proud to present Jesus Franco's masterpiece for the first time ever on DVD.


MILL OF THE STONE WOMEN 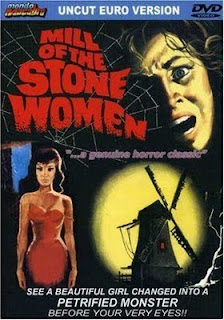 (France/Italy 1960)
DIR: Giorgio Ferroni
STARRING: Pierre Brice, Scilla Gabel, Wolfgang Preiss
MM Description: In the early years of the last century, just outside Amsterdam, Holland, a young artist is hired to do a study of a famous local landmark. A windmill that contains stone statues of notorious female monsters of the past: murderers, poisoners and witches.

One day he meets a mysterious but dangerously beautiful real life woman in the mill. Before long he is drawn into her clutches. But who is this girl? And what is the terrible secret that keeps her hiding from the outside world?

The DVD version of this horror classic restores all the scenes cut from its original US release including the notorious topless shots of sexy French star Dany Carrel.

To match its sparkling cast, the film boasts a suitably wild plot. It features hooded killers, mad scientists, an eyeball thief and some of the sleaziest murders seen in a long time. Set in and around a Paris brothel, the action is as hot and steamy as you could wish for.

Those are some pretty awesome looking movies.

Great list there Dave, there's a few on there I must add to the collection, especially Silip... The last MM disc I picked up was Lorna the Exorcist which I thought was really superb...

Wes - As a friend of warned me before I watched Silip: "Keep reminding yourself that the opening scene does end." (That's not to say that it's long or uninteresting, just upsettingly horrible to sit through).

Glad to see love for Doctor Z. That film is something else.

I had a couple of chances at the Don't Deliver Us DVD back in the day...but never grabbed it. Kinda sad about that one.

Hey The Mike! Yeah, Dr. Z is a lot of fun. And the ending of Don't Deliver Us from Evil has to be seen to be believed (I mean that in a good way, of course).

Thanks for the recommendations! I already own Alucarda on DVD, and Mill of the Stone Women and Don't Deliver Us From Evil look interesting. I'll keep an eye out for them.