Russell Alexander Stewart, my father, died unexpectedly shortly before Christmas. He was 90, so I use the term “unexpectedly” because he wasn’t ill the day he died, he wasn’t suffering from a terminal illness. He died having plans for things to do over the upcoming holiday.

He also died in his bed, and I, like I did every Tuesday, had spent the night at his house. I found him that Wednesday morning. It was apparent that he was awake when he’d died, and that he had suffered some sort of discomfort, hopefully, for only seconds. I heard a noise some time during the night, but it only half-awakened me, and not hearing anything subsequently, I fell immediately back to sleep. I believe that noise was my father dying, and that bothers me deeply.

My mother, Davida, died in 2015. I’m an only child, and with my father’s death, I am left a fifty-five-year-old orphan. I have no children. This is the end of this line of the Stewart and the MacEachern families.

One of the things that has struck me about my current experience of grief is that it has been both the most intense feeling possible and a feeling of nothing at all at the exact same time. It has also been, as expected, a complete emotional rollercoaster, passing through each of the stages of grief, but often within minutes of each other and in no discernible order. I like it best when I am feeling acceptance.

It seems next to impossible to accurately describe grief to someone who has yet to experience it. Grief is hard. No one wants to feel it, and it’s rare to find anyone who wants to be around it. Yet, it’s a universal experience. The price for loving someone.

What I can say, though, is that it’s like grief is its own entity that swoops in unexpectedly and completely disrupts your life until it’s done with you. Not that it ever leaves you, but as the weathered cliche goes, you adapt to it to a manageable degree. I note that I’m dealing best with grief when I feel my father’s presence in one way or another. I’m at my worst when I’m feeling his absence.

Years ago, when I asked a friend how she was doing after her father had died, she told me that she was going with the current, because fighting it made it worse. I’d always held on to that advice, because it makes so much sense to me, and when it comes down to it, in order to work towards releasing grief, you have no choice but to feel what your grief wants you to.

Currently, my husband and I are sorting through my father’s belongs, deciding what to keep, what goes, and who gets what. Each item that realistically has to leave the house feels like a betrayal. My father did an exceptional job of keeping my mother’s belongings. He needed them to feel her presence. It’s hard not to feel that in doing a different style of sorting that I am letting him down. That, I guess, is all part of my process. I also think it’s one of the emotions that makes up the complexity of grief, an experience of dichotomies, both universal and intensely individual. 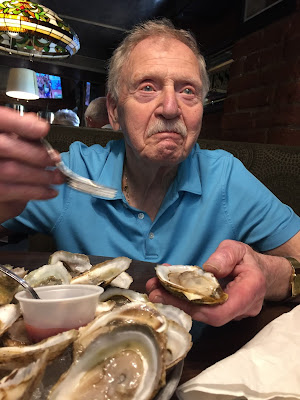