I'm Young, Beautiful and Pissed Off! 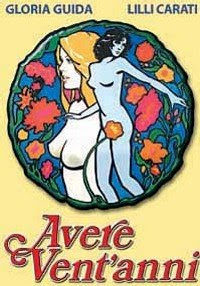 Okay, so I may not be young and beautiful, but I am pissed off sometimes. Anyway, Gloria Guida is all three of these things. And so is Lilli Carati. Their characters, Lia and Tina respectively, meet on an Italian beach and bond over this goofy but honest declaration. They decide to head off to a commune in Rome together, stealing food, scamming coffee, and looking for dick (and lady dick) along the way. Once there, they discover that everything's not quite what they expected, except for the always terrific Ray Lovelock. To say more would do damage to a first time viewing.

I'd read a lot about this flick (Thanks, Eli Roth!) before finally tracking it down in a version that I was able to play, just barely. I got my mitts on Alfa Digital's iffy "Avere vent'anni" 2-disc set that features the original Italian cut and the massacred US version. Both variations are faded and print damaged, and I wasn't able to play the Italian version on the first DVD player I tried. Despite this, I was happy to be able to finally see this flick, and in the recommended Italian version; the US cut completely eliminates the film's impact and meaning.

"Avere vent'anni" is directed by Fernando Di Leo, who apparently, along with the films' two stars, were known for sexy comedies about free spirited women and their sexual adventures, among other types of flicks (I also just wacthed Di Leo's "Slaughter Hotel", and despite my love of the most convoluted giallo, "Slaughter Hotel" just didn't do it for me. In a word: boring.). This is perfect for what the film has up its sleeve, since it pulls a "Psycho" and becomes a different kind of film entirely. To that end, the film's tonal shift most reminds me of Takashi Miike's great "Audition", and it is above all other things the film that "Thelma and Louise" wanted to be.

"I too am young, beautiful, and pissed off!" You can be too.