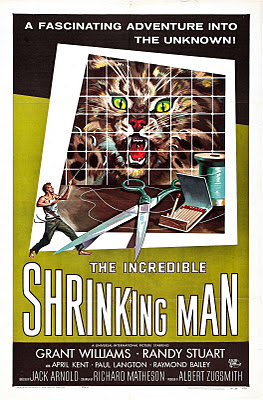 Just like most great sci-fi and horror films, The Incredible Shrinking Man has bigger things going on than first meets the eye. In this case, at its core, Shrinking Man is a metaphor about facing death.

Scott Carey (Grant Williams) passes though a radioactive cloud and soon finds himself getting smaller, and smaller, and smaller… His doctors race to find a cure, and his wife (Randy Stuart) sticks by his side while Carey, frustrated, scared and helpless, becomes a S.O.B. and even flirts with having an affair. Putting his dignity aside, Carey is forced to sell his story to the media in order to generate income. 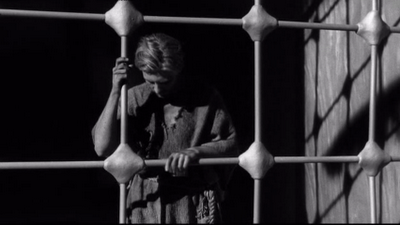 (SPOILERS) Eventually his fate is sealed, even if he doesn’t realize it yet, when he becomes trapped in the basement of his home. Believing him dead, his wife exits the house (and the movie), and Carey falls victim to everyday household inhabitants and occurrences that wouldn’t pose a threat to an average sized/healthy individual. He continues to fight against fate, but in the end, he gives himself over to the inevitability of the experience. (END SPOILERS)

Based on Richard Matheson’s novel The Shrinking Man, the film is notable for a number of reasons, not the least of which is treating its premise and individual scenes as serious stuff, emphasizing their impact on characters rather than presenting them solely as (potentially silly) spectacle. Check out the screen shot below for an example of how ridiculous this film could be if take out of context, or if the filmmakers didn't bother to humanize the characters. 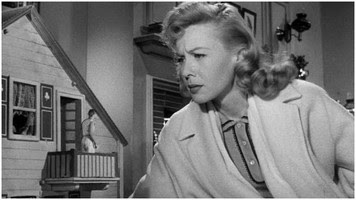 That’s not to say that the film is lacking suspense or excitement – in fact, it contains some of the most exciting scenes and effective special effects in all of 1950’s science fiction, but the film takes time in its brisk 81-minute running time to go beyond wonderment to wisely explore the way in which events register with its characters. It also allows its protagonist to become unlikeable at points – quick to anger, selfish, and cruel to his wife – a rarity in an Atomic Age leading man, but these are also traits that make Carey more human than your typical square-jawed hero. 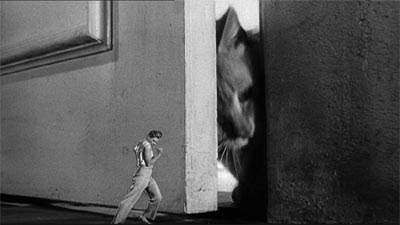 The real trick of Shrinking Man, however, is that it’s able to sell its theme and heady ideas through pure entertainment. No grandstanding speeches here; just a fantastic (in the fantasy sense) scenario and memorable battles with a housecat and a spider that have become giants. It’s something Alfred Hitchcock was adept at – conveying big ideas via entertainment in such a way that the audience doesn’t know it’s being encouraged to think. Here, director Jack Arnold (back again from the previous two entries in this series of Ultimate Collection posts) does the same.

The film’s ending also resonates (See it to find out exactly what I mean). It’s a fitting conclusion to a film that ponders big issues, and it leaves the viewer feeling contemplative after the thrills. A classic.