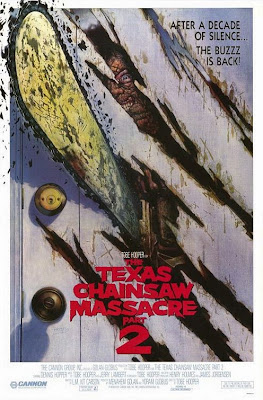 Imagine that you’re a filmmaker in the position to create the follow up to your biggest success to date. Adding stress to the opportunity is the fact that this success is one of the key touchstones in horror movie history. With this as his starting point, Tobe Hooper must have been under an enormous amount of pressure when making the sequel to The Texas Chainsaw Massacre (1974).

Revisiting the sequel almost 30 years later, I think Hooper performed an amazing feat. To recreate the perfect storm of elements that made the original what it is would have been an impossible task – something that both fans and critics didn’t fully appreciate at the time of the film’s release. Instead, Hooper and co-writer/co-producer L.M. Kit Carson updated the scenario and again commented on the social climate at the time in which the film was made, but now it was the 1980’s with which they were dealing.

With that in mind, Chainsaw 2 is a dayglow gore fest (some of the over the top FX were cut during the film's initial release, but they've been reinstated in subsequent versions) that fits in perfectly with the comedy-horror vibe that defined the genre in that decade (see Re-Animator, Night of the Creeps, Evil Dead 2, et al). Gone is the realism and harsh horror of the original, replaced by fantasy and fanaticism – an understandable reaction to the Reagan Era. The difference is there, right from the beginning when we first hear Hopper and Jerry Lambert's terrible synth score that really emphasizes the potential annoying weakness of the instrument at the time. Happily, there are a number of great tracks from 1980's bands like The Cramps and Concrete Blonde on the soundtrack (some of the film is set in a radio station) that help balance it.

Present in the first film, black humour is more obvious in Part 2. The family homestead is replaced by the Texas Battle Land amusement park, taking the threat away from that of the dysfunctional family and its interaction with youth culture, and placing it entirely in the realm of entertainment. This conscious choice away from the sensibilities of the 70’s and into the 80’s is reflected in Tom Savini’s effects work, Cary White’s Production Design and Richard Kooris’ cinematography.

The cast of the original, so natural in their performances, are matched in their effectiveness by their 1980’s counterparts, albeit in a “heightened” manner that connects with the film’s tone. Caroline Williams as Stretch delivers an outstanding performance and the only one grounded in reality; Dennis Hooper, a returning Jim Siedow, Lou Perryman, and Bill Moseley as the unforgettable Chop-Top are all terrific too.

In 1986, a fan of the original Texas Chainsaw Massacre expecting more of the same would be greeted by a film that seemed to revel in the exact opposite of what the 1974 classic offered: over the top onscreen gore (trimmed, but the build up if not always the payoff was there), broad comedy, overtly sexualized violence... Where was the fear, the ferociousness of the original? The fact is that 1986 was a far different time than 1974, and the differences between the two films are the differences between the two decades. That in itself makes The Texas Chainsaw Massacre Part 2 definitely worth another look.