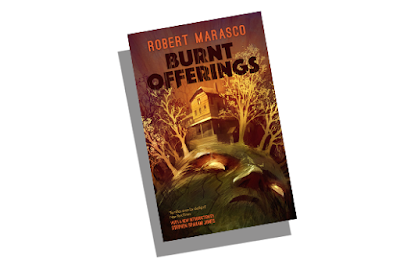 Like many horror fans my age I was introduced to Burnt Offerings through the 1976 Dan Curtis movie starring Karen Black, Oliver Reed, Bette Davis and Lee H. Montgomery. A fan of supernatural horror, particularly of the 70’s variety, I couldn’t wait to see this, and eventually did during a TV broadcast.

I thought it was okay.

Over the years, I’ve grown to appreciate and enjoy it more, and its source novel, written by Robert Marasco and published in 1973, is one that is regularly recommended on many lists of great horror novels. Being so familiar with the movie, however, I was disinterested in reading it due to what I imagined would be boredom by familiarity.

Burnt Offerings is about a couple and their six-year-old son (he's 12 in the movie) who don't relish the idea of spending another hot summer in NYC. They find a country estate renting cheap, and at the wife's instance jump at the opportunity, towing beloved Aunt Elizabeth along. It isn't long before things amongst the family members are going badly, while the house seems to be regaining some of its former lustre...

Though it may sound like something you've read many times before, it's absolutely not. Any similarities to other "bad house" stories are surface; here, it's all about what lies beneath the surface, both in story and in storytelling.

It's interesting that Curtis cut the opening section of the book which he'd apparently shot for the film, because it took too long to get to the main action. What this section does is to set up the all important dynamic between the characters and to give meaning to their motivations over the story to come. This reflects the main difference between the movie and the novel; what the movie can only touch on is the heart of its source material, the inner thoughts and motivations of its characters.

At its core, Burnt Offerings is as much about the disintegration of a family as they get everything they’ve always wanted as it is about anything else. A relatively short read at only 260 pages, it deserves to be included in the ranks of classic contemporary (an oxymoron?) novels like Rosemary’s Baby and The Haunting of Hill House. I can’t recommend it strongly enough.