The girl next door knocked and asked the boy to come to her house. He did, and as they approached, someone yelled, “Get him!” The group of girls grabbed the boy and pulled him to the ground. They began yelling at him, whipping him with branches and throwing stones at him. Eventually, somehow, the boy made it back home.

Years later the boy, now a man, asked the girl, now a woman, about the incident. The woman said, “We were just kids.”

The man said, “But I knew not to do that to people when I was a kid. Why did you do that to me? Was it because we were friends with (an unpopular family in the neighbourhood)?”

“I never thought that,” the woman replied. “I always thought it was because you were different." 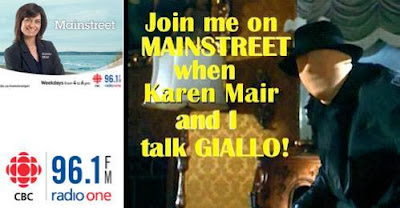 Click here to hear me talk about Giallo with Karen Mair on CBC Radio's Mainstreet.

This Image is Disgusting and Shouldn’t Be Posted - UPDATE 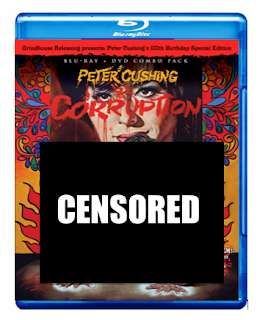 A couple of weeks back I posted this. I also posted a request on Facebook for comments from specific people, mostly women, involved one way or another in horror and cult films. This was the feedback I received:

BJ Colangelo
Horror Blogger; Website: Day of the Woman
It's a disgusting and horrible image made specifically to illicit that sort of response. You're supposed to find it disgusting. It's supposed to make you upset. That's the purpose of horror imagery. However, censoring it or refusing to post it will take away that power. Not everything in this world is supposed to be sunshines and lollipops. I would be more worried if someone DIDN'T find the image disgusting.

Amanda Reyes
Horror Blogger; Website: Made for TV Mayhem
I'm glad you tagged Jovanka, because I remember reading an editorial piece in Rue Morgue some time ago about a letter that I believe she received from a victim of rape who found I Spit on Your Grave cathartic (I'm sure she can expand on that better than me), but that goes into the actual content of the film and not so much the lurid poster imagery of a woman's rear that is now so infamous. But it's what I thought of. I hate I Spit on Your Grave, but I don't think it's necessarily my place to tell someone they shouldn't watch or like it. And certainly the writer of that letter got something extremely positive out of the film.

That said, I'm more sensitive now to this kind of art work than I used to be. Blame all of the gender and representation classes I take at school. However, when I see stuff like this, it's more like a personal discussion with myself as to what I dislike about what the image says. Some images are more offensive than others. And I don't think artwork for movies should be edited/censored/etc (of course, there will always be exceptions). Real images, well, those are different and we know the difference. Adults here, right?

I think I'm talking in circles though. It's an interesting question because horror has really opened itself up to females and has been attempting to do that for a while (read Nowell's Blood Money if you haven't), so it's a legitimate issue. Also, I agree that your friend should have maybe sent you a private message, or maybe opened it up to a discussion instead of a "This is disgusting, so feel bad about posting it" kind of response.

OK, and one more thing (sorry), as for the actual Corruption artwork, it's creepy and total exploitation. It's also kind of fantastic, and captures some of the old grindhouse day art. I'm more into it than not, I think.

BJ Colangelo (responding to Amanda)
I actually wrote a very, very similar article about ISOYG in that regard. Horror imagery will always have a different impact on others based on their personal experiences and beliefs.

Jovanka Vuckovic
Writer, Filmmaker; Website: Jovanka Vuckovic
Images like this are not the language of horror per se. Rather, it is the currency of exploitation cinema. The two are not mutually exclusive, yes, they have often frolicked in the same stained bed. But I'm tired of "horror" as genre taking the heat for all of the misogynistic imagery that exists in the movies. Horror is not inherently sexist. Exploitation films are. And as far as exploitation films go, this is pretty standard stuff. It's no worse than the poster for Maniac, which depicts a man with a hard-on holding a knife in one hand and a woman's scalp in the other. Or the poster for Jose Larraz's The Violation of the Bitch, and its incendiary tagline: "She asked for it." Lurid poster art and inflammatory taglines put asses in seats. While no one is particularly proud of the rampant misogyny that characterizes many exploitation films, it is a part of film history. And there will always be people that make sweeping personal judgements about you for watching these films. And that's okay, because that's their issue, not yours. As you were.

Stacie Ponder
Horror Blogger, Cartoonist; Websites: Final Girl, Stacie Ponder
Had your friend framed her issues as opening the door to discussion, I'd have no problem with her bringing it up. But making it into a personal attack is inappropriate and not particularly helpful. Then again, I'm sure everyone who's proclaimed him- or herself to be a horror fan has gotten the disapproving "How can you watch that stuff?" from someone, as if all films in the genre are exactly the same. You've got to choose your battles, I suppose.

Though I know it can often be misleading, cover art simply helps me decide if I want to go further and check out a movie or not. While this doesn't look like something I'd care to see (my relationship with exploitation cinema is a tenuous one), I find it far less offensive than the cover of I Spit on Your Grave and its sequel.

And again, while I think talking about these topics is good and healthy, context is important. Had you posted it with commentary like "aw yeah look at this bitch get it LOL" or something, that'd be one thing. But it's the cover art, and to post it within a review or discussion post is nothing to worry about. People are going to be "triggered" by all sorts of imagery, whether from horror movies or something else. Like I said, those become choose your battles scenarios. Whether or not you censor your site is up to you...here, I think you pulled the trigger too quickly.

Maitland McDonagh
Film Critic, Writer; Website: Flick Chick
Why not? Because some people might be offended? That seems ridiculous to me. I'm offended by real life violence against women... and men and children. But one of the purposes of art is to be confrontational and to generate discussion. Cinema is an art form, regardless of what particular people think about particular movies, and promotional imagery connected to movies is as much an art form as is vintage advertising poster imagery. My feeling is, if you don't like it, don't look at it, but don't assume that your opinions should extend to limiting other people's options. I hate Jeff Koons' work, but that doesn't give me the right to prevent other people from seeing in your timeline or the middle of Rockefeller Center.

Amanda -- I should have said earlier that I think we all become more sensitive to this kind of imagery as we grow older, just because we know more about so many things, whether because of books we've read or classes we've taken or things we've experienced. But I don't believe that kind of knowledge makes us inherently more or less intolerant... at best it makes us more capable of conducting dialogues with ourselves and others about certain images disturb us and what we can and can't learn from our reactions and those of others.

Donna Davies
Filmaker; Website: Ruby Tree Films
Hey Dave. I'm loving this discussion. Refreshing to see people I truly respect sharing their thoughts here. I tend to agree with Maitland. If you don't like it don't look. Personally I find the actual artwork for this cover unappealing in every regard.

Robin Bougie
Illustrator, Writer; Websites Bougie Man, Cinema Sewer
I also would classify myself as a feminist as one of the issues I am most passionate about is equality, and like you, I am also a horror fan. On top of that, I'm an artist who creates work that could easily be classified as being the same genre that makes up that CORRUPTION cover art. There is violent imagery, both sexualized and non-sexualized in my creative output, and I stand by the work very proudly. I believe that art is a reflection of our world -- of its problems, its beauty, its horror -- not an instigator. There is an old adage that I quite like, that only censors and psychopaths can't tell the difference between fantasy and reality. But more to the point... she's right. That image IS disgusting. It depicts disgusting behaviour. But I for one put a lot of value on a society where we are allowed to deal with these problems openly in this way. There is a lot to be said for exploitive imagery that may not be obvious to someone reacting to it on only an emotional level.

Leslie Taylor
Filmmaker
I have no problem with the image in the context of Grindhouse exploitation movie art. It also makes a difference (to me) that it is painted instead of a photograph. But your friend has a right to be disgusted; I can understand someone finding it upsetting, particularly someone who parses images of female representation through feminism rather than the history of horror cinema. But reactions to visual or thematic taboos are personal. I do not agree that there can be a unilateral judgment that the image is disgusting. There is no objective, agreed-upon boundary that you chose to cross. You write about horror and you post about your nightly viewing, which is often horror. You are a buff! A pundit! It should not be surprising to friends to find images like this on your FB page. And it is YOUR Facebook page.