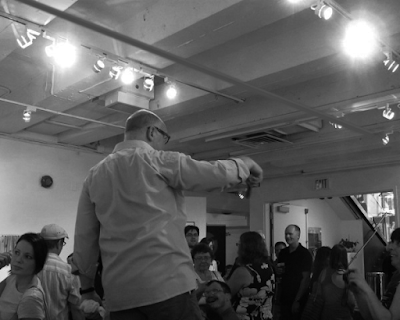 While reading John Waters’ latest book, Mr. Know-It-All (Pub: Farrar, Straus and Giroux), he hit upon something I’ve been thinking a lot about lately:

“Nowadays you don’t have to leave where you were born. Actually, you shouldn’t leave.  Stay where you are and make it better! There’s no new youth movement happening in New York or L.A. that you are missing. It’s too expensive there for any revolutionary ideas to even breath.”

As everything is not so much location as it is timing when it’s not a coffee shop you’re running, a friend’s show recently completed its 6-show run - Meanwhile in Ward 16. This friend, Rob MacDonald, has been creating local theatre for what… more than 30 years now. Together, he and I have made short films, worked on a published book, and released a CD as Chimp (aka Chimp CA), among other realized and unrealized projects.

Over the years, as both Rob and I have worked professionally as copywriters and honed our craft as writers of other material, I’ve gotten to know a lot of others in Prince Edward Island who are of similar talent and circumstance, and I’ve come to realize that we’ve all helped to create a scene here in PEI.

We are our own local versions of John Waters, of Diane Arbus, of Debbie Harry. The thing is, we will never achieve the level of renown that these people have, but locally, we create something essential, and something that artists from other places can’t create for those of us who live here.

That’s not to say that there’s not a lot of local garbage. Of course there is, there is everywhere. And who’s to say that I haven’t created some of that garbage myself?

There are also those who dub themselves this or that type of creative person without the experience, talent or understanding of what it takes to actually earn that title. You can’t just call yourself a heart surgeon and go out and perform open-heart surgery, you know.

And on the other end of the spectrum, there are Islanders who actually achieve success and/or recognition beyond our shores; painters, musicians, writers. And many of them remain here while helping to build the reputation of the Island’s cultural scene elsewhere.

On that note, I think the Island’s film scene is genuinely exciting right now and we’re going to see more and more growth there, maybe even a few breakthroughs beyond what we’ve already experienced.

The kismet of reading the above mentioned section of Waters’ book and the wrap of Rob’s show created my come-to-Jesus moment; realizing just how exciting PEI’s creative scene is, realizing that I’m a part of it, and understanding that its value is something I think we all ought to recognize and nurture. When work deserves it, that is.

More than anything, I think, people who write, act, paint, shoot or sing crave a response. The arts are a conversation, and if you’re not responding, that conversation doesn’t take place.

To make sure that it does take place, first and foremost, we’ve got to get out there and engage with local cultural experiences. And when we do, we’ve got to let the people behind them know that we saw their show, read their book, listened to their music. Congratulate them if you don’t have anything positive to say — all creation takes work, and a “congratulations” is wonderfully noncommittal. Criticism is welcome only if you know how to give it and you are invited to give it. Otherwise, silence is king.

We're always birthing new people here who have something new to add to the cultural landscape, and technology has been making it easier and easier to share that work. We’ve got a pretty amazing thing going here, but I fear we don’t always know it. Or maybe it’s just that it’s something we don't notice because it’s always been around us, or worse, because of the misconception that local means no good. Whatever the case, I’m just glad that I had my epiphany. I’m ready to be ordained. 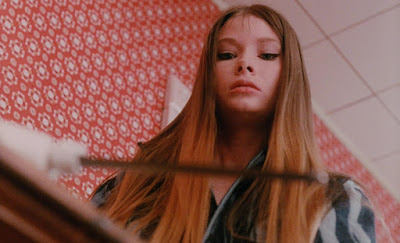 Created to cash in on the surprise box office success of George Romero’s classic Night of the Living Dead, I Drink Your Blood is more of a day-glo affair, with a pinch of Manson Family grotesquerie thrown in for topicality.

I Drink Your Blood is a ridiculous film, but it tries so hard in all the right ways that it fits the bill exactly when you’re in the mood for a sick, comic book-style splatter flick. The tone is set by Horace Bones himself during the opening black mass, wherein he intones the oft quoted:

“Let it be known, sons and daughters, that Satan was an acid head. Drink from his cup; pledge yourselves. And together, we'll all freak out.”

Bearing an uncomfortable resemblance to the 1995 Dean Koontz novel Intensity, High Tension becomes its own animal with a twist ending that many have criticized, but which I feel gives it its essential and defining sting in the tail.

The simple story tells of two friends, young adult students, who head to the home of one woman’s parents in the French countryside in order to study. Once there, a serial killer attacks and takes one of the women hostage in his beat up van which looks like a travelling abattoir.

The actors are utterly convincing, the cinematography rife with sickly colours, and the film is violent, gory and suspenseful with special effects provided by Italian splatter master Giannetto De Rossi who is known for his work with Lucio Fulcio among others. In short, it delivers the goods.

During the climax (SPOILER) we discover that one of the women is the serial killer and has taken the other hostage, although we’ve been shown the craggy, 60+ Nahon as the killer until now. The reason for the chaos: Her denial of being a lesbian. Note, it’s not the fact that she is a lesbian, rather the fact that she suppresses it that facilitates the tragedy.

While many have criticized this twist, ignoring the admittedly subtle clues, and saying that it creates oversized plot holes, I think it’s really up to the audience to fill in those gaps by accepting that what we’ve been seeing is a story told through the point of view of an insane participant, and so things as we’ve seen them up to this point are simply not as they’ve seemed. (END SPOILER)

This French film was picked up for North American distribution by Lion’s Gate who trimmed it and dubbed it into English. Needless to say, the uncut version in its original language is the one to seek out.

Based on the novel The Haunting of Hill House by Shirley Jackson, The Haunting is perhaps the greatest ghost story ever committed to paper and to film. Director Robert Wise had worked with producer Val Lewton in the 1940’s directing The Curse of the Cat People and The Body Snatcher for RKO, and so was well versed in the sort of psychological, shadowy horror found in Jackson’s work. Shortly after directing West Side Story and immediately before The Sound of Music, Wise returned to his roots and gave The Haunting the onscreen treatment it screamed for.

Each actor is perfectly suited to his or her role, inhabiting the by now overly familiar premise of a group of people who gather to explore reported psychic phenomenon in a haunted house, a massive one at that in the case of Hill House. The question here is, is the phenomenon they experience real, or some sort of manifestation created by the lonely Eleanor?

Additionally, the score by Humphrey Searle, cinematography by Davis Boulton, screenplay by Nelson Gidding, set design and sound work contribute immeasurably to the film’s impact. This is an example of a film where all departments, much like The Exorcist, are at the top of their game. And for my money, the hand-holding scene, later aped in Sam Raimi’s Evil Dead 2, deserves to be included on any list of great scenes of horror.

On a similar note, the opening paragraph of Jackson’s novel is among the best to be found in the horror genre or any genre for that matter, and Wise matches it with the film’s opening montage. Here, Jackson's opening deserves the last word:

“No live organism can continue for long to exist sanely under conditions of absolute reality; even larks and katydids are supposed, by some, to dream. Hill House, not sane, stood by itself against its hills, holding darkness within; it had stood so for eighty years and might stand for eighty more. Within, walls continued upright, bricks met neatly, floors were firm, and doors were sensibly shut; silence lay steadily against the wood and stone of Hill House, and whatever walked there, walked alone.”