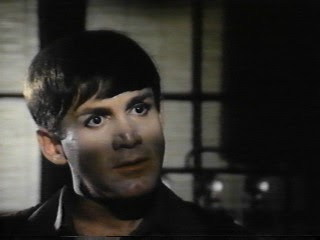 I... um... I...Okay... Tom Basham is an insane man-child who hosts a kids TV show under the name of Mr. Rabbey. He kills abusive parents.

"The Psychopath" is odd. It's shoddy and well made, unintentionally funny and weirdly effective. Mr. Rabbey is one of the strangest characters I've ever encountered in a film. Imagine Pee-Wee Herman in "Death Wish". Suspend your disbelief and accept that this man could have managed to make it to, what.. 30(?) in the real world without ever having been diagnosed with a serious mental disorder, and just go with it. Mr. Rabbey is obviously out of it, yet he has his own TV show. People in the medical profession praise him for his hospital work. His producer makes excuses (and dinner) for him when others criticise him. I guess we can add this flick to a short list of films about "simple" souls passing among us and changing lives in the process. You know, "Being There", "Forrest Gump"... and now "The Psychopath".

This movie is worth checking out because, in all likelihood, you'll never see another like it. Whether that's good or bad depends on your taste. Mine says, "Give Mr. Rabbey his TV show back!"