31 Films That Give Me the Willies 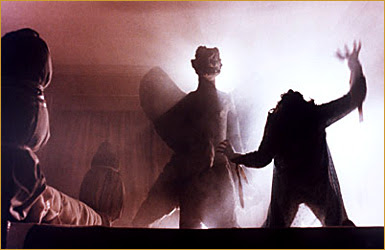 On his website http://ShootTheProjectionist.blogspot.com, Ed Hardy Jr is compiling a list called 31 Films That Give You the Willies. Readers were asked to e-mail a list of 31 films (There's 31 days in October) that scared them, arranged in decending order. Films receiving 3 votes or more were added to the final voting list, which now totals 181 movies! Now... from that list of 181, readers are again asked to select, in decending order, the 31 films that scared them the most. The results will be posted on Halloween.

The current list of 181 movies is nicely varied with some relatively obscure horror movie choices. Compiling my own selections was difficult, though it was interesting to take a look at those flicks which I found personally most effective. To be sure, there were a lot of different reasons why certain movies worked for me --- the age at which I'd seen a film, personal experience, etc. 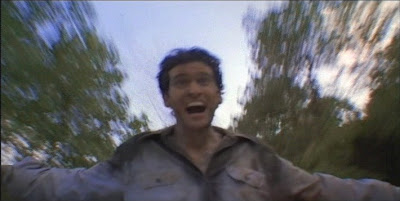 Ed has also posted a bonus list, asking for your 5 Favourite Horror Comedies, which, of course, I was happy to provide. Mine are:

Though I would've loved to also include The Abominable Dr. Phibes, An American Werewolf..., Basket Case, A Bucket of Blood, Creepshow, Dead Alive, From Beyond, The Howling, The Little Shop of Horrors (original), Night of the Comet, Night of the Creeps, Piranha, Re-Animator, Shaun of the Dead, Squirm, and Spider Baby..., I didn't.

I think you and I went to #3 and #12 together. You also made me watch part of #5. And you know how I feel about horror movies. Most of my flashbacks of terrifying images (and I only HEARD the guy standing in the corner in Blair Witch because my hands were over my eyes) are now somehow associated with you. Although on some level I think this may give you some pleasure. P.S. The Airport movies are the reason I have to take so many drugs to fly. And Jaws made me laugh the last time I saw it.