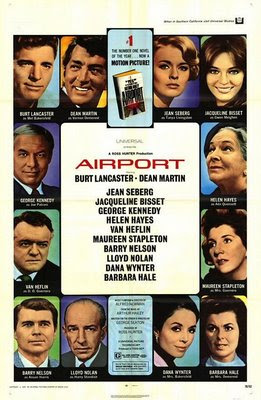 It's been years since I saw the original Airport on TV. Here's why I haven't revisited it: It takes itself entirely too seriously (It has an all-star cast, after all), and it's got the classic disaster movie formula all wrong for my tastes. See, in my kind of disaster flick, we meet a variety pack of characters, then half an hour in, disaster strikes, and we spend the rest of the film watching celebs try to escape. Airport saves its disaster for the end. I guess it follows the Hitchcock example of suspense over shock (A group of people sit around a table, talking. Suddenly, a bomb goes off. That's shock. A group of people sit around a table, talking. Cut to a bomb. Cut back to the people. Back to the bomb. Etc. That's suspense.).

The film, based on the best-seller by Arther Hailey, features a soap opera-y plot about pilots, flight attendants (they were stewardesses then), airport authority figures (i.e. George Kennedy, the only actor to appear in all four Airport movies), passengers, and a depressed on-board bomber (I remember feeling really sorry for the bomber's wife when I saw this flick.). The celebrities on and off board include Burt Lancaster, Dean Martin(!), Jacqueline Bisset, Jean Seberg, Maureen Stapleton, Dana Wynter, Van Heflin, and Helen Hayes.

Though Airport feels more like a drama than a disaster movie, and it doesn't even feature a ballad sung by Maureen McGovern, credit where credit is due, it really did kick off the 1970's disaster movie craze. 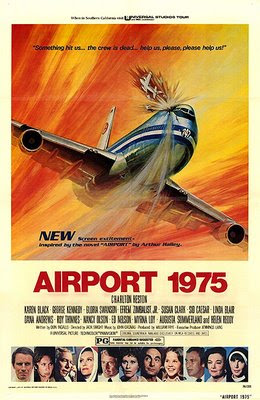 Now this is the reason I own this 4-movie set. Airport 1975 follows my preferred disaster movie formula (1. intros, 2. disaster, 3. survival), and it's a great bad movie. Plus the cast is terrific disaster movie fodder: Karen Black, Charlton Heston, Linda Blair (as an in-transit liver transplant recipient), Helen Reddy (as a singing nun), Gloria Swanson, and a zillion other recognizables, including George Kennedy.

When Dana Andrews has a heart attack while flying his small private plane, he crashes right into the cockpit of a Boeing 747, killing the pilot and co-pilot. It's up to stewardess Karen Black (yay, Karen!) to land the plane with the help of her pilot boyfriend, Charlton Heston. (Black's plea of, "Something hit us... The crew is dead... Help us, please, please help us! " adorned Airport 1975's cool poster.) Heston first tries to help Black by coaching her via headset, but when that doesn't work, he has himself lowered into the plane through the hole in the cockpit (Hello, Freud!). I love it.

Yeah, it's bad, but it's really entertaining (which is more than I can say for respectable films like "Out of Africa"), so what more do you want? Oh yeah, it's got a era-centric theme song with soaring violins. Makes you feel like you're flying through the clouds, your stewardess scarf fluttering in the wind over your shoulder. Oh no! Now it's in your eyes. You can't see ! Watch out for that jumbo jet! 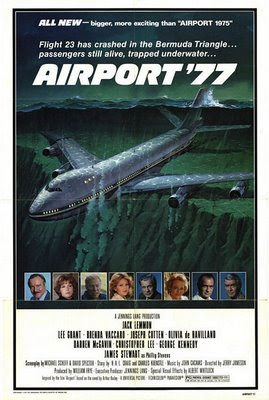 After the '75 model Airport flick, this is probably the next most entertaining, and its plot is even more ludicrous. A jumbo jet loaded with celebrities crashes into the ocean... and sinks! Art thieves are responsible, but that doesn't really matter. That the airplane stays together underwater for 90 minutes is a feat of aero-engineering (does that term/job exist?). Eventually the soggy jet is raised from the bottom of the ocean floor.

As a kid, I was horrified by the notion of being trapped undersea in an airplane. How dare the filmmakers exploit my fear of flying AND of drowning?! 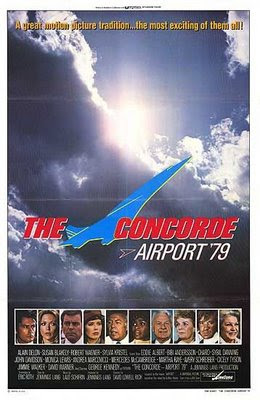 Ding dong! That's the death knell of the Airport series, rung by this putrid blue screen mess. It's like a whole bunch of airplane disaster movie elements were written down on cards, thrown into one of those bingo ball-spinners, and pulled out randomly to create the plot and casting.

The Concorde: Airport '79 commits the cardinal movie sin: It's uninteresting. And that's with Charo on board. With a poodle. Evading rockets. With George Kennedy's help. And it takes place on a Concorde. At least Sting isn't on-board like he was when the real Concorde flew its last flight. He would've brought his lute. And that would have been the high-point. That's all I've got to say about this.

I still have fond memories of the first Airport. I remember finding the scene where Dean Martin almost convinces the guy to give up the bomb and turn himself in kind of moving.

And that moment where the guy is sucked out the window and the sound effect that went along with it.

dave m. ---- are you sure that sucking sound wasn't the movie itself?

heh.
that's why it's a bad idea to see the movies you loved as a child.

Excellent! The "Airport" Terminal Pack has been on my shelf for a while. I am a sucker for big star in big danger ...