My Favourite Horror Movies, Alphabetically:
Invasion of the Body Snatchers 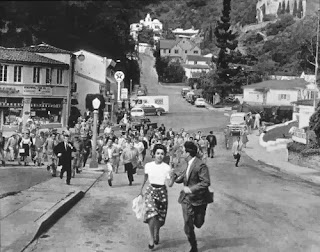 This, the original film version of Invasion of the Body Snatchers, is a taut and tight horror flick that peddles that most 1950’s of flavours – paranoia. Beneath all the speculation about whether its theme is anti-McCarthyism or anti-Communism lies a stone cold tale about losing our humanity. In fact, the scene I find the most effective is the one that shows exactly what is lost when you become incorporated. SPOILER: Hiding while being pursued by pod people, Miles kisses Becky and receives nothing back but a cold stare. END SPOILER. It’s at this moment when Body Snatchers' humanity really comes across for me. When a nudge to maintain our individuality, emotion, and free thought is this entertaining, how can you refuse? As for the much lamented bookend scenes imposed by the studio, I do my best to ignore them, and just mentally fade out with the original ending as intended.