¡Tintorera! is a movie I've wanted to see ever since I first spied the TV ads and newspaper slicks during the flick's original North American release back in 1977. As a 13-year-old Jaws fan, I was game for any killer shark movie, and the ¡Tintorera! poster, sporting a shark emerging from the water with a woman in its mouth, had me. Too bad it took me 34 years to finally catch up with this Mexican/UK co-pro on Desert Mountain's 25th Anniversary Edition DVD, because the newly teen me might have enjoyed it more than the middle aged me, but somehow I doubt it. 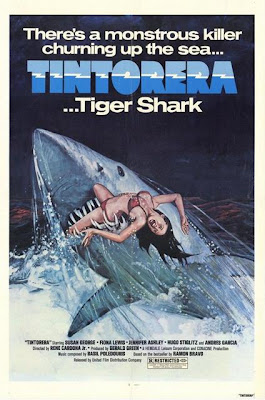 The fact is that ¡Tintorera! is a mess of a movie. Not only that, but it turns out that its advertising campaign was somewhat misleading. It takes FOR.EV.ER for the shark do do anything approximating an attack, so what we're left with is a competition-for-female-companionship-turned-friendship between cult favourite Hugo (Nightmare City, Survive, Cyclone) Stiglitz and Andrés (also Cyclone and The Bermuda Triangle) García. When they're not competing for an never-ending supply of women including Susan (Straw Dogs, Fright) George and Fiona (The Fury) Lewis, they're killing sharks, seemingly for kicks. And herein lies another of ¡Tintorera!'s problems; the use of real-life animal killing for entertainment. In ¡Tintorera!, almost every sea animal you can think of is speared, clubbed or has its throat slashed. Completely unnecessary, completely indefensible and completely un-entertaining. All this despite a speech from Stiglitz early in the film in which he notes that the killing of sharks "makes him sad".

With it's, oh 15 minutes of killer shark scenes, ¡Tintorera! pads its running time with 70's T&A movie hijinks and a threesome subplot (calling it a subplot is unfair since it's given at least as much screen time as the shark plot) similar to that of the naked-in-the-sun flick Summer Lovers. Priscilla Barnes from Three's Company and The Devil's Rejects shows up, credited as Priscilla Barner, and I think Stiglitz falls in love with García briefly, at least that's what one awkward dialogue passage and much quick cutting back and forth between the two would indicate. And why not; they're always either naked or wearing Speedos.

¡Tintorera! was directed by René Cardona Jr., never one to say no to exploiting sensational real-life tragedies (Survive!, Guyana: Crime of the Century) or a trend (Jaws). It's a long 126 minutes. Some lucky viewers, however, will be able to catch the 85-minute version that retains all the nudity and shark "action". Hugo Stiglitz and an enticing exploitation poster are not enough; ¡Tintorera! is not recommended.

Good stuff Dave, I've yet to see this one but everything I've read about it echoes your review - great poster, lousy movie. I would love to see Survive though - that's hard to find nowadays...

Thanks Wes. My dad actually took me to see Survive when it was originally released. Just one of the many reasons I'm scared of flying!

The shorter version of this was a chore to sit through, too. The scene where the stuntman is dragged through the water by the shark almost made it worth the $10 on the old EP mode tape I used to have.

I saw this movie in theaters back in the day. Just as bad then as it is now but I'll watch any movie with Susan George.