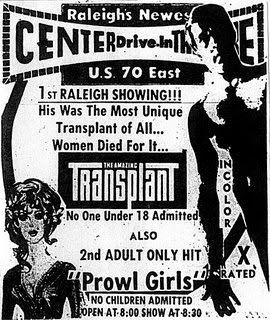 Holy fuck! That's what I had to say after watching "The Amazing
Transplant", my first Doris Wishman-directed film.

I'd had the pleasure of discovering Wishman around the same time that
I discovered Andy Milligan ("The Body Beneath", "The Ghastly Ones").
These two filmmakers are very similar, and both photograph sex and
nudity in the most sexless manner possible; cold, disconnected bodies,
cellulite and pimples emphasized by harsh lighting. Where Milligan
had ambitions toward dysfunctional family costume melodrama though,
Wishman abandoned all pretense to create absurd, eye-popping trash
cinema. Her films appear so unencumbered by all but the most basic
filmmaking skills that they approach the level of high art.

I love the opening of "The Amazing Transplant". I'd go so far to say
that it's one of my favourite opening scenes in film history. I guess
what it did for me, really, since it was my first taste of Wishman, is
that it introduced me to an entirely unique point of view in
filmmaking. It looks different, it feels different, it sounds
different than most movies I've seen. If a Wishman film were an
orange, I'm sure it would taste like a banana. I didn't care if this
was because of lack of traditional talent or lack of resources. What
mattered to me was that the opening scene was something unique, something
that made me react, and something that made me want to see more.

Anyway, the nude musician answers the phone to discover it's her
boyfriend calling. He wants to see her even though it's Saturday and
she goes shopping on Saturday. After a conversation that honestly
feels like it was written by school children, the boyfriend comes over
and kills the harpsichordist (who wouldn't?). Then he decides to get
a penis transplant. Unfortunately, his new penis turns him into a
rapist too, sort of like "The Cock of Orloc".

If that slice of plot isn't amazing enough, Wishman's style cinches
the deal. Inanimate objects are edited into the film at odd times to
cover transitions or (I'm guessing) missing footage. The dialogue is
clearly haphazardly added later. Lighting seems incidental. It's
like Wishman was driven to get these things on film and she didn't
have time to worry about junk like sync sound and story structure.
It's amazing that she slowed down long enough to have film loaded into
the camera. 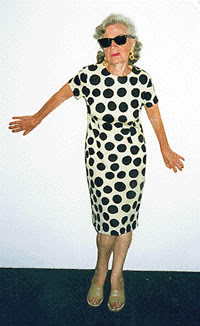 Doris Wishman, who died in 2002, represents an aspect of movie making
that I love: The filmmaker who just needs to get a movie made
regardless of ability, using whatever equipment she can get her hands
on, telling the most ludicrous stories that can be duct taped
together. Intentional or not, Wishman's movies have a point of view,
and that's something that's missing from far too many movies.

Other notable Wishman flicks include "Bad Girls Go to Hell", "Another
Day, Another Man", "Deadly Weapons" (starring Chesty Morgan), "Let Me
Die a Woman", and "A Night to Dismember".