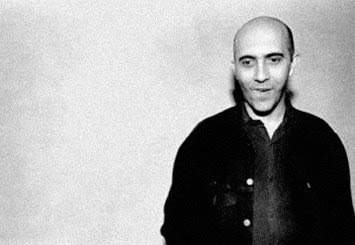 I’d heard about French filmmaker Gaspar Noé for a quite a while. His film “Irreversible” made a big splash when it was released in 2002 due in no small part to a controversial and infamous scene. I’d put off seeing “Irreversible” because of that publicity… Not because I didn’t want to have my boundaries pushed, but because, sometimes, there’s nothing like hype to kill my desire to see a movie: Familiarity breeds contempt; There’s no way “Irreversible” can live up to its reputation; Some of the talk around the film made it sound pretentious; Its North American marketing made it look like a generic, boring erotic thriller (yawn). So finally, 6 years later, I got around to watching “Irreversible”.

To paraphrase a movie I hate, “Shut up. You had me at bonjour.”

I load the disc into the DVD player, and the credits roll, but these aren’t your typical credits. They’re like something Godard would do. Bold. Out of sync. The movie proper begins with a buzzing camera gliding around a tiny apartment/hotel room accompanied by the most irritating background tone since “Eraserhead”. The camera movement and the tone are a little nauseating, as is the green fluorescent hue that saturates everything we’re looking at. Philip Nahon from “High Tension” (maybe repeating his role from Noé’s feature debut “I Stand Alone”) tells a friend that “time destroys everything”, stating for the first time something the film will go out of its way to prove.

The camera moves outside as people are carried on stretchers out of a bar called Le Rectum. And that’s all I’m going to say about plot. From this point on, we discover that the film is being told backwards. That is, the order that we’re watching the scenes is the opposite order in which they occurred, much like “Memento”, but with a different and thoroughly justified purpose. The film begins with ugly and ends with beautiful. This gives extra weight and meaning to the scenes viewed last in “Irreversible”, because instead of being “sweet”, they’re “bittersweet”, driving home the movie’s message.

As for the infamous scene, it’s disturbing, brutal, and wholly believable. It’s an unflinching presentation of a major plot point. Due to the press about this scene, I was, on some level, prepared for it. I was not prepared, however, for a scene that, for me, came entirely put of the blue, and was one of the most upsetting things I’ve seen in a movie. It was an act of violence that I didn’t expect, and that was so realistically rendered that my brain couldn’t separate fantasy from reality. With the formerly mentioned scene, I could rationalize that actors were going through the motions of mimicking a brutal act of violence aided by a bit of CGI. With the latter scene, it looked like the filmmakers were actually committing this act of violence. My impulse was to stop the people from doing what they were doing on screen; to literally reach in and break up the confrontation. The same scene might not affect you the same way, but that was my experience of it. For a filmmaker to craft a scenario that has that kind of effect on me says something, personally, of his depth of ability. I’ve seen plenty of onscreen gore, violence and brutality, but this reached me on a different level. Outside of filmed incidents of real cruelty and death, I can’t think of a film-viewing experience that was more immediately disturbing. This scene too, however, is also a major plot point, necessary to the telling of the story and the presentation of what the movie’s about.

“I Stand Alone” features Philip Nahon as a man who has just been released from prison for killing a man he thought had raped his daughter (in reality, she has had her first period). Bitter, racist, homophobic and sociopathic, Nahon’s character wanders around a Paris that no longer exists as he knew it before he was incarcerated. His tension and confusion build like the sick-making camera moves, green-infused images and droning tone in “Irreversible”. It can’t lead any where good…

“I Stand Alone” reads as an exploration of modern-day France and the cultural tension that lies beneath the touristy Eiffel Tower and baguette-baking surface of the country. Nahon is a terrific actor who’s in every scene, creating a bridge between both films by appearing in the opening scene of “Irreversible”. His director, Noé, has been called a combination of Godard and William Castle, and this, oddly enough, fits perfectly. “I Stand Alone” and “Irreversible” should be seen, in that order, without reading too much about them beforehand. Part of their effectiveness lies in the unexpectedness of whatever pops up on the screen next. “Irreversible”, in particular, should be viewed with the knowledge that you’re going to experience something disturbing, but also something bigger than that. Love it or hate it, you’re going to see something that you’re going to think about afterwards, and something you’re probably going to want to talk about with others who’ve seen it too.

Stay tuned for Noé’s next announced project “Into the Void”.