14 TRACKS TO MAKE YOU FEEL GOOD

A while ago, two important figures in the history of horror film passed away: Paul Naschy, whose 1968 “Frankenstein’s Bloody Terror” this site takes its name from, and Chas Balun, whose writing about the genre helped define what that art is all about.

Naschy, born Jacinto Molina, was the Spanish successor to Lon Chaney, Boris Karloff, Bela Lugosi and Lon Chaney Jr. In his career he managed to play versions of many of the classic monsters, his most popular character being werewolf Waldemar Daninsky, a role he essayed in 12 films. Alternating between (and sometimes combining) the task of scriptwriter, director and star, Naschy’s enthusiasm for the genre comes across in each and every one of his features, from his crazed Gotho the hunchback in the insane “Hunchback of the Morgue” to his well… crazed strangler in the giallo “Blue Eyes of the Broken Doll”.

I’ve been watching a lot of Naschy movies lately, both before and after his death in November of 2009. Of note, I’ve revisited “Frankenstein’s Bloody Terror" for the first time since the mid-70s’. It’s a lot of fun with its combination gothic atmosphere and “modern” setting. No Frankenstein though, but for a brief mention in the prologue. Apparently, the North American distributor was contractually obligated to deliver a Frankenstein pic, so the name was added as an afterthought. Naschy’s there as Daninsky, however, fighting vampires and wearing some mighty impressive getups.

I’ve also experienced the aforementioned “Hunchback of the Morgue” and it really is one of the most off its rocker movies I’ve ever seen. Naschy’s portrayal of Gotho is a little too hilarious for me, unfortunately, though he received accolades for his performance. Here, he’s a necrophile who is tricked by a mad scientist who promises to restore his deceased love to life, if Gotho will continue to provide him with bodies for his experiments. The movie is a mind fuck of the first order as campy hunchback and goop creature scenes are mixed with disturbing footage of rats actually being set on fire and a real beheading, as the filmmakers were given the okay to decapitate a corpse. The story goes that Naschy downed some scotch before hand, but was unable to continue beyond the first slice into the corpse’s neck. Yikes! Strong stuff and completely insane when mixed with the other less intense content.

“Blue Eyes of the Broken Doll” is a giallo of, if not the first order, then the second order. It’s got everything we love about gialli, from convoluted storytelling and set pieces, to nudity, violence and a lyrical title. “The Hanging Woman” is not a star vehicle for Naschy, but he makes an impression as a sleazy gravedigger in this entertaining Scottish-set period piece about inheritance, covens and the living dead. And the Naschy-directed “Panic Beats” is a gory good time that features plenty of double-crossing as the spirit of a knight returns every 100 years to slash, chop and spindle unfaithful spouses. Bottom line, there are plenty of Naschy flicks out there waiting for you to discover if you haven’t already. Check out the invaluable Mark of Naschy website in the links section for more in-depth information. 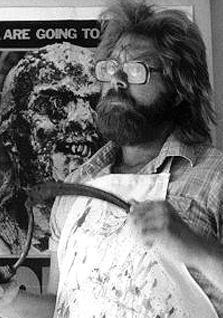 Chas Balun wrote about horror movies with humour, love and in his own voice. An opinionated (Thank God!) writer, Balun didn’t mince words when he felt something was worthy of scorn, just as he was incredibly generous when he felt something was worthy of praise. His writing is responsible for turning many of us who were fear fans in the 80’s on to flicks we’d never heard of, particularity a lot of Euro-Horror. “Nekromantic” anyone? My copy of Balun’s “Deep Red Horror Handbook” fittingly and proudly houses an autograph I was able to eke from the silver marker of Dario Argento, a filmmaker Balun championed, at the Toronto B-Festival premiere of “Two Evil Eyes”. Balun’s other essential writing includes “Horror Holocaust”, “Beyond Horror Holocaust”, and “Gore Score”, as well as his “Deep Red” magazine, and pieces for “Fangoria” and many others. Also a talented artist who did illustrations for many of his publications (check out some of his t-shirt work at www.RottenCotton.com), Balun’s writing helped change the way we look at horror films, and gave birth to a generation of writers.