I Had a TV Cartoon Show! 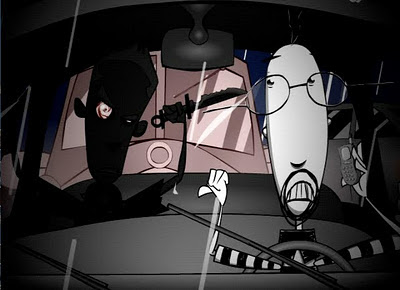 So back in the early aughts, Copie Zero TV + Media, led by Executive Producers Campbell Webster and Matt Zimbel, brought And Yet I Blame Hollywood to television. "AYIBH" is the movie review cartoon strip that I still write/draw monthly for The Buzz. The concept of the strip and toon is that I, usually accompanied by whomever I'd actually seen the movie with, would comment on the flick while clips from the movie were interspersed with the animation. Its emphasis was/is on the experience of going to a particular movie, all in either five panels (strip) or two minutes (toon).

The production schedule worked this way: We'd pass potential film titles for review past the ZeD producers, they'd yay or nay, then I'd write the script for each episode. Copie Zero Associate Producer David Malahoff was the script editor, and when each script was good to go, Campbell would take voice actors Rob MacDonald, Matt Rainnie, Rob MacLean and Nancy McLure to Perry Williams' Virtual Studios to direct the recording of dialogue; I kept my distance during this part of the process for fear that I would go prima donna. When that was complete, the script and voice tracks would be sent from Prince Edward Island to the animators, located first in Nova Scotia, then later in New Brunswick. They'd e-mail back a storyboard version of each episode and we'd comment on each, and then they'd produce the final version. Ensuring that everything went smoothly along this chain was Copie Zero Associate Producer Ghislane O'Hanley.

The show (actually an interstitial or short) ran for a year, and it was a lot of fun to do. Overall, 24 episodes were produced; some were shown at film festivals. After broadcast, each episode was available on ZeD's website for a while, but when Zed was eventually cancelled, the website was taken down.

Just today, Gene Fowler published a link on his Facebook page to a cover story in Atlantic Business Magazine that charts his progress from Fatkat to his new company, Loogaroo. It's an interesting read and an excellent case study of what can happen in the animation industry. Gene and I traded a few comments back and forth, and then he directed me to a Vimeo page that features 20 And Yet I Blame Hollywood episodes. Glad to find that AYIBH has a web presence again, here's a magic link to them.