Going to See Once Upon a Time … in Hollywood … Again 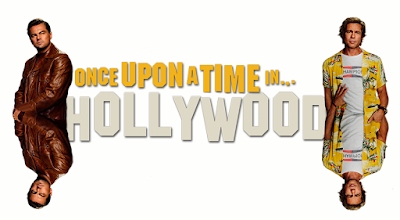 This movie, man. I just don't know what to make of it. I like Quinten Tarantino’s movies a lot, but I've had no desire to go back and watch them, no matter how much I've enjoyed them at the time of original release. I'm not quite sure I know what that says... I don't believe in the "do they hold up?" school of thought, so it's not that. Perhaps it's just that they are so connected to periods of time in my life and so familiar that revisiting them seems pointless.

2018. Word is that Tarantino's upcoming Once Upon a Time … in Hollywood is going to be about the Manson Family. My initial reaction was that I’d see it, but with trepidation. Watching Tex Watson and Susan Atkins make wise cracks while butchering celebrities just sounded like a bad time to me.

Turns out, like a lot of click bait pieces, most of the advance online writing I’d read about OUATIH took the Manson angle out of context. This was a fairy tale about a changing Hollywood. The Manson Family, they were more of a facilitator than a focus.

And now, for the rest of this piece, we're in spoiler territory.

When the movie was eventually released, I went to see it with a group of friends. We all seemed to leave with a spectrum of reactions. It was messy (not necessarily a bad thing), but I was bothered by the ending in particular. Due to its title, I’d entered the theatre expecting a Spaghetti Western set in late 1960s Hollywood, ignoring the fact that the Once Upon a Time westerns and gangster flicks were fairy tales themselves. My bad. Tarantino’s ending here is most definitely meant as fairy tale ending, a point that was lost on me — or maybe more accurately didn’t work for me — especially during my first viewing.

This was a movie I wanted to discuss with people. I needed to work out my reaction to it, and more importantly, my reading (or misreading) of it. I felt my reaction was out of step with everyone around me, so I went online to try to start a conversation. What I learned was that, in the cult of Tarantino, you don't question his stuff, even if it's not coming from a negative place. Unfortunately, this reaction had the effect of shutting down what I wanted to talk about. So I discussed it separately with a couple of friends who gave me their perspectives. That was useful. What I knew for certain was that I needed to see the movie again, and so I did.

The things I'd liked about the movie were still there. I loved Margot Robbie’s portrayal of Sharon Tate, the way she’s the spirit of the entire movie and of the era it portrays. It’s hard not to enjoy every second Brad Pitt is onscreen. There are some truly great scenes, like DiCaprio and Julia Butters’ exchange and their scene on Lancer; Pitt giving Margaret Qualley a ride; the Spahn Ranch sequence; Tate going to a screening of The Wrecking Crew (but putting your feet up on a theatre seat is fucked up).

Then there were some elements that all of a sudden began to work for me — the extended shots and scenes of people just driving, driving, driving, the celebration of mediocre movies and music. It was an era when people thought they had time to spare, and even movies that fail to hit their marks like Three on a Couch can be appreciated for their performances or craftsmanship. Without the expectations of my first viewing, I could sit back and let the movie play out as it was meant to. Still, there was that ending. I don't think I'll ever find it bittersweet as intended.

For some reason, the Tate Murders have always held a horrible dark place in my psyche. They are unfathomable to me. Sitting through Tarantino’s revisionist ending the first time had left a terrible taste in my mouth. It felt somehow disingenuous, a slap in the face to Tate, her unborn baby, the others slaughtered that night. Clearly, that was not Tarantino’s point, but it was the effect it had had on me. Sitting through it a second time, I experienced the ending as it was intended. But I still found it distasteful. You don't have to, but I did.

Still too, the elements that hadn't worked for me during that first screening still didn't work for me. Tarantino's recreations of era specific TV shows seem too cinematic to be believable; the silly “cute” pitbull reaction shots seem better suited to another kind of movie; there are a couple of truly embarrassing and childish jokes — Brad Pitt carrying Leonardo DiCaprio’s load, We love pussy; just what was with that Bruce Lee scene, what did the possibility that Brad Pitt's character killed his wife add to the movie; Tarantino's over the top killing of Tex, Sadie and Katie seems like Tarantino parodying himself, and if I were Tarantino’s editor, I probably would have suggested that the movie start with the meeting between DiCaprio and Al Pacino with the earlier stuff left on the editing room floor. My take.

Still, it's that ending that I keep coming back to. In Little Red Riding Hood, Grandma may have gotten cut out of the big bad wolf's stomach, but in Hollywood, Sharon Tate and her friends are still dead.