Oh... Have You Read My Piece in Rue Morgue Magazine? 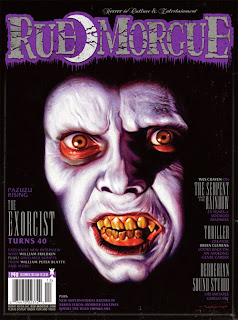 The December 2013 issue of Rue Morgue (#140) contains an interview piece I wrote based on a fax conversation(!) I had with one of my idols - Brian Clemens, OBE. Clemens is the writer/creator of several projects of which I'm a fan, including Dr. Jekyll & Sister Hyde, The Golden Voyage of Sinbad, And Soon the Darkness, See No Evil, the TV series Thriller and The Avengers, and he is the writer/director of Caption Kronos: Vampire Hunter.

Clemens, now in his 80's, was approachable, engaging and considerate. We made contact via his wife's email address, and when asked what his preferred method of communication over the Atlantic Ocean would be, he chose fax as he kindly did not wish to trouble his spouse.

I ended up with much more information than would fit in the three-page Rue Morgue piece, but the content has been distilled to a nice and informative article that will hopefully turn a few new folks on to Clemens' work. To top it all off, The Exoricst, one of my favourite flicks, is the cover story of this issue.

This is my second piece for Rue Morgue (info about the first piece is here), and the whole experience has been a thrill for me. This past October, I was in Toronto and stopped by the Rue Morgue office where I met Editor-in-Chief Dave Alexander and some of the Rue Crew. Dave, Monica, Justin and Ron were great, and I look forward to dropping back into their lair where I'd love to spend weeks in both the DVD and book libraries. 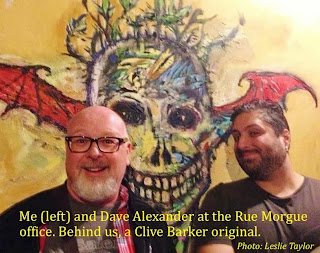 For more info about Rue Morgue, check out their always interesting and always morbidly atmospheric website. 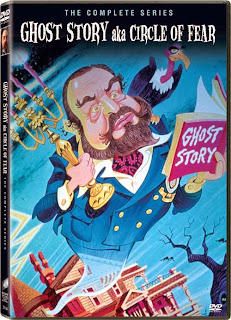