The Most Dangerous Film Book Ever Written 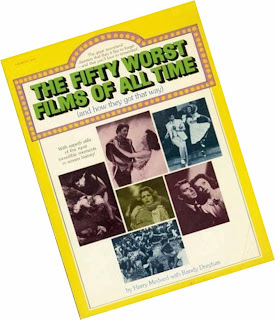 In 1978, Randy Dreyfuss with Harry Medved and Michael Medved published The Fifty Worst Films of All Time (And How They Got That Way). In it, the authors selected 50 films they’d designated as the worst, mocking movies by Alfred Hitchcock, Sam Peckinpah, Alain Resnais, and others.

At the time of the book’s publication I was 13, and I enjoyed its tone and content. It was fun to laugh at movies that either failed or that I didn’t understand. Now, as an adult, I can see the smugness and lack of understanding that this book was selling. Unfortunately, I bought into it wholesale at the time, and I wasn’t alone.

It seems to me that the publication of The Fifty Worst Films of All Time coincided with a Zeitgeist that was ready to erode the way we appreciate movies. After all, home video and the whole “B-Movie” phenomena were just around the corner. Throughout the 1980’s, making fun of movies became a popular pastime – We rediscovered the films of Ed D. Wood Jr., Elvira was a pop culture icon, and the term “B-Movie” became synonymous with “bad movie”, typically referring to the product of an earlier era. Thankfully, my relationship with movies moved on and I developed a deeper and different kind of appreciation for cult films, in part encouraged by the publication of Michael J. Weldon's essential 1983 book The Psychotronic Encyclopedia of Film - the prefect antidote to The Fifty Worst Films of All Time. 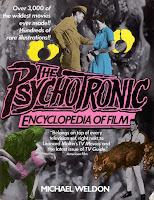 One thing that this opening of my horizons showed me was that the kind of thinking responsible for books like The Fifty Worst Films of All Time simply misses the point. What it does, in the end, is limit understanding and appreciation, and encourages small mindedness. Where’s the joy in making yourself feel superior to a movie that is the product of its time? In my experience, a bad movie is one that doesn’t engage me; it’s a film that has been tested and committeed out of its skin; it’s a movie that’s designed for Oscar Season; and sometimes, more often than not, it exhibits the qualities that Dreyfuss and the Medveds would seem to endorse.

Having typed the preceeding words, I’d also encourage you to read The Fifty Worst Films of All Time, place it within the context of its time while doing so, and to draw your own conclusions. As I see it, it’s a bad book, mean-spirited and dumb, and I see it reflected in the people who talk too much in a theatre, text during the movie, and who laugh smugly at onscreen events that just aren’t funny.

Randy Dreyfuss, Harry Medved and Michael Medved. They were true trailblazers, not in writing about bad movies, but in bad writing about movies.

Dave S
Charlottetown, PE, Canada
A graduate of the Film & TV Program at Humber College (Toronto), Dave Stewart got his start in professional writing with the first issue of The Buzz back in 1995. Since then, he’s written for SOLEDAD, Art Decades, Rue Morgue, Studio CX (Cathay Pacific), CBC PEI, and restroslahsers.net (now archived), among others. In the early 2000s, his And Yet I Blame Hollywood cartoon for The Buzz was adapted and broadcast nationwide on CBC-TV's ZeD. Retiring from The Buzz in 2020, Dave’s an ad man by day at Graphcom. Recent projects include: Monster Man (collection of short horror stories), Fear from a Small Place (multi-author anthology), Before Grindr (six-part online interview series exploring the secret gay social history of Prince Edward Island), The Satan Show (The Island Fringe Festival), Glory Hole (multi-artist show at The Guild), and reader/contributor to the Charlottetown (live) and 2019 Calgary Pride (online) performances of Toronto’s Queer Songbook Orchestra. In 2020, he was awarded the Lifetime Achievement Award by the City of Charlottetown during their annual Arts & Culture Awards.