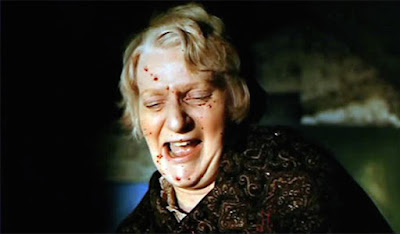 Outside of the House of Hammer, director Pete Walker (along with frequent collaborator/screenwriter David McGillivary) created some of the most interesting British horror films of the 1970's - House of Whipcord, House of Mortal Sin and Frightmare, among others. Much of their best work, intentionally or unintentionally, attacked institutions of all sorts, with Frightmare, which takes an uncharitable look at the family, being my favourite.

To explain the plot of Frightmare in any depth is to damage a first-time viewing. Suffice it to say that Deborah Fairfax plays Jackie, a young woman who goes to outrageous lengths to keep her troubled family functioning as best she can. Sheila Keith, a terrific screen presence who appeared in many of Walker's films, is outstanding here as Dorothy Yates, the matriarch of the family.

What Frightmare has to say about family, particularly in its last scene, may not be cheery, but it does reflect a grotesquely heightened version of what for far too many is reality.