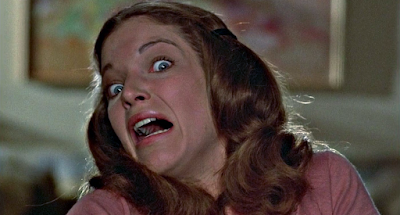 Like the idea of horror movie as opera? If so, this one’s for you.

Brian De Palma followed his hit Carrie with this blood and thunder adaptation of the John Farris novel of the same name. Both films use telekinesis in their plots concerning teens with psychic powers, only here we’ve got two teens trying to reach each other physically while a dastardly plot set in motion by a secret government organization goes off the rails.

With its intricate plot and heightened tone, The Fury is often dismissed as a mess, but I love its operatic histrionics which are matched by one of John Williams’ finest scores. It’s certainly over the top, but what Brian De Palma movie isn’t?

Fine performances, classical fimmaking, excellent make up effects from Rick Baker and William J. Tuttle (despite a brief bit of seam showing), and an ending that theatre-goers talked about long after they’d exited the theatre make this a favourite with some wise deviations made from its source novel.