What I Say When People Ask Why I'm a Horror Fan 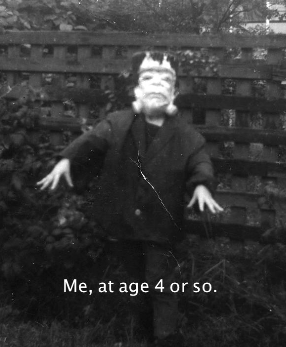 I have loved horror movies dating back to a viewing of The Deadly Mantis at age four. Seemingly ever since passing through that creaky gateway, the uncomprehending have wondered about my love for the genre. It always seemed to me that their queries held an air of judgment, an assumption that there was something not quite right about me. These inferences made me shy away from looking deeper into my fascination with the genre until I realized that “I don’t know; I just do” wasn’t a good enough explanation. I began to reflect on my response to horror, and oddly enough, the first thing I discovered was the thing I was most afraid of:

I like the odd, the macabre, the other. I don’t necessarily learn, think and act like the majority. Once I started to accept it, though, I could go ahead and live my life, with the important caveat that I have a firm grip on the difference between reality and fantasy.

Aside from letting my freak flag fly, what else do I love about the genre?

• I love the pure physical reaction I have to horror.

• I love that horror is somehow a companion to, and commentator on, my real world experiences, grief, and woes.

• I love being part of a subversive group of fans that doesn’t typically reflect the mainstream.

• I love that most horror is a metaphor.

• I love that horror can reflect great creativity and extreme emotions.

• I love that horror can show you the unexpected.

• I love that horror has no boundaries.

• I love gazing into the forbidden.

• I love uncovering horror films from around the world, the silent era, the discount bin, and those that have been ignored.

• And when it comes to splatter, I love the effects the way I love a magician's trick.

What am I left with? Horror is my genre, and that doesn’t make me creepy, crazy, in need of shock therapy, or a threat. I’ll continue to stay cloaked in its cape as long as I’m able, and I’ll take my love of it with me into the void.

It's directed by William Girdler, the same guy who did Grizzly, Three on a Meathook, The Manitou, and Day of the Animals. Though the movie is relatively rare, the picture and sound quality of this DVD is pretty poor. Still, it's fun for fans of this sort of thing. Like me.

Email ThisBlogThis!Share to TwitterShare to FacebookShare to Pinterest
Labels: horror fan, why do you like horror movies
Newer Posts Older Posts Home
Subscribe to: Posts (Atom)