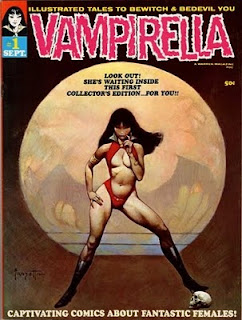 Dynamite Entertainment is releasing volume 1 of the Vampirella Archives on October 12, 2010. One of horror's greatest creations, the Vampi Archives joins the essential Creepy Archives and The Eerie Archives already published every few months by Dark Horse Comics.

Originally biting the public on its collective neck back in the 1960's, these fantastic Warren Magazines snaked around the sticky Comics Code issues of the day by publishing in a magazine format. As a Monster Kid of the 1970's, these B&W mags were a formative discovery for me, terrifying me not only with their spooky stories, but also with their nerve-fraying illustrations by such masters of the form as Frank Frazetta, Bernie Wrightson, Wally Wood, and a host more. Vampi, herself, was a creation of the late, great Forrest J. Ackerman, the man who coined the phrase Sci-Fi and gave the world one of its great publications, Famous Monsters of Filmland. Now if they could just clear up the rights issues so that The Famous Monsters Archives and a re-release of the Vampirella Monster Scenes model kit could hit stores, I'd be a happy middle-aged Monster Kid. 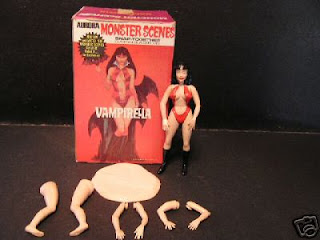 PUBLISHED IN RUE MORGUE! A NEW KICK FOR ME 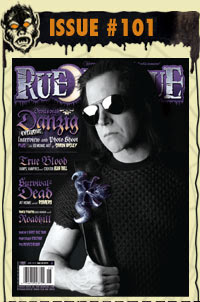 Hey! My first piece for Rue Morgue Magazine has been published in the June 2010 issue, #101. It's a Cinemarquee article about the 1957 giant grasshopper flick "Beginning of the End". I'm a huge fan of Rue Morgue, so this is an A+ experience for me. Managing Editor Dave Alexander was an ace in his editing advice. Yay for me, I say. 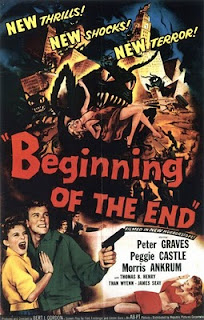