The terrific writer Dennis Cozzalio at his essential Sergio Leone and the Infield Fly Rule website creates fantastic film quizzes with some regularity. A new one is up, and despite trying to post my answers for over an hour, I gave up and decided to post 'em here. Anyone who is interested in movies ought to give Dennis' quizzes a try; they're a blast. Here goes:

Q1) Classic film you most want to experience that has so far eluded you.
A1) 'Cause I'm a giallo fanatic, I'm going to say Footsteps on the Moon, and mean it!

Q3) The Big Sleep or The Maltese Falcon?
A3) The Big Sleep. Such an amazing and confusing flick. It's actually the Noir that taught me how to watch the genre... forget about following the details of the story and just experience it. Fan-tastic!

Q4) Jason Bateman or Paul Rudd?
A4) Bateman's great, but Rudd is so damn likable (attractive) and funny. Rudd, I say, Rudd!

Q6) Who are the Robert Mitchums and Ida Lupinos among working movie actors? Do modern parallels to such masculine and no-nonsense feminine stars even exist? If not, why not?
A6) Try though I might, I just can't come up with modern equivelants. That leads me to say that Hollywood during the Mitchum/Lupino era was a differnt place and a different time, and Hollywood as we know it today just isn't the same "breeding ground".

Q7) Favorite Preston Sturges movie
A7) I've only seen one, but it's a doosie! Sullivan's Travels.

Q8) Odette Yustman or Mary Elizabeth Winstead?
A8) Winstead -- 'Cause of Pilgrim (yet to see it) and Death Proof.

Q9) Is there a movie that if you found out a partner or love interest loved (or didn't love) would qualify as a Relationship Deal Breaker?
A9) Not really. But liking Forrest Gump, Dances With Wolves or Pretty Woman would make me think that we wouldn't be going to many movies together.

Q10) Favorite DVD commentary
A10) Doris Wishman on A Night to Dismember.

Q11) Movies most recently seen on DVD, Blu-ray and theatrically
A11) DVD: I Spit on Your Grave ('77); Theatre: The Last Exorcism ("Would you like a blowing job?" Now that's comedy!).

Q12) Dirk Bogarde or Alan Bates?
A12) Bates. Did you see what he did with Oliver Reed in Women in Love?!

Q13) Favorite DVD extra
A12) Trailer! I don't really need much more than that.

Q15) Best comic moment from a horror film that is not a horror comedy (Young Frankenstein, Love At First Bite, et al.)
A15) See Anewer 11 for a fine moment, though not my fave. That would probably be The Omen. I'll never understand that flick's popularity, despite a few good scenes, an effective score and an appealing exploitation concept. Its execution is too high and mighty and silly at the same time for my taste. However, said comedy moment occurs during the terrific scene early in the flick when Damien's nanny hangs herself during the child's birthday party. Among the horrified party guests is a clown, who stares in shock. The shot of the clown during all that horror always hits my funny bone.

Q16) Jane Birkin or Edwige Fenech?
A16) Despite "Je t'aime... moi non plus" breathlessly rolling around in my iPod and Seven Death's in the Cat's Eye in my DVD collection, I LOVE Fenech, and she's just become a Facebook friend! Queen of the Giallo!

Q18) Best horrific moment from a comedy that is not a horror comedy
A18) Charles Napier murdering Sheri Eubanks in the bathroom in Supervixens!

Q19) From 2010, a specific example of what movies are doing right…
A19) You know, this is the first year where I can't really thing of ANYTHING I'd put on a best of the year list... So sadly, I'm going to say that the best thing movies are doing circa 2010 is continuing to make movies.

Q20) Ryan Reynolds or Chris Evans?
A20) Reynolds. He has the best torso in the biz.

Q21) Speculate about the future of online film writing. What’s next?
A21) You mean beyond stealing ideas? I guess the opportunity for collaboration is immense.

Q22) Roger Livesey or David Farrar?
A22) I hate it when people pass on these questions, but I don't think I've actually seen either of these gents in anything, so...

Q27) Name a stylistically important director and the best film that would have never been made without his/her influence.
A27) Hitchcock! And, off the top of my head, Dressed to Kill, but the potential answers are almost limitless... any thriller since The 39 Steps!

Q28) Movie you’d most enjoy seeing remade and transplanted to a different culture (i.e. Yimou Zhang’s A Woman, a Gun and a Noodle Shop.)
A28) Red Dawn made in Russia. Seriously. I'd enjoy watching that. Or maybe Goin' Down the Road, the qintessential Canadian film, re-made in the US of A.

Q29) Link to a picture/frame grab of a movie image that for you best illustrates bliss. Elaborate.
A29) To me Hitchcok IS the movies, and movies are bliss. This is one of his best moments, both fuuny, creepy, and to the point, cinematically. From Strangers on a Train. All heads turn to watch a tennis match. All heads but one. Bruno Anthony, the sociopathic killer, stares at his unwitting accomplice... and at US! 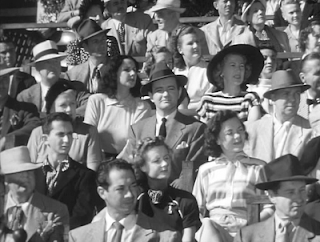 Q30) With a tip of that hat to Glenn Kenny, think of a just-slightly-inadequate alternate title for a famous movie. (Examples from GK: Fan Fiction; Boudu Relieved From Cramping; The Mild Imprecation of the Cat People)
A30) Fatter, Pussycat! Eat! Eat!