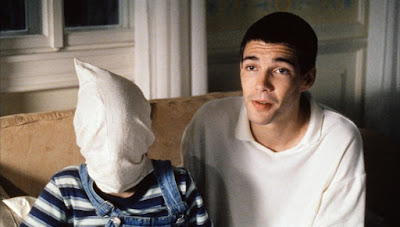 In writing about each of the flicks that I’ve included in More Favourite Horror Flicks, I came to a dead stop when I reached Funny Games. If you look at the date of my last post in this series – September 20, 2016 – you’ll get an idea of just how difficult I find writing about this film. The truth is, I just didn’t want to. Funny Games is not a pleasant film, nor is it a fun one. It is, however I think, an outstanding one.

A difficult watch, Funny Games tells the story of a family – wife, husband, son – that is terrorized by a couple of arrogant and psychotic youth. Things you don’t want to happen do happen. The fourth wall is broken to implicate the viewer in the mayhem. It’s engrossing, to be sure, but it’s also deflating. And it’s entirely engrossing.

One of the great strengths of Funny Games (I’ve not seen Haneke’s American remake with Naomi Watts and Tim Roth – I don’t see the point) is that you react to it. Strongly. My experience of it is that I became so engaged that I felt like what was happening on screen was happening to me, to people I cared about. It’s a weird and unpleasant immersion that is so strong that it rises above the despair it presents and emerges as a work of truly exceptional moviemaking.

Whew! It feels great to finally get that done.