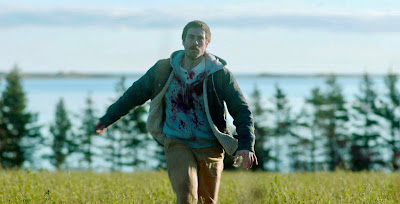 Kevin (Stephen Oates), running from his bloody destiny in A Small Fortune.

When you live in Prince Edward Island, it can be difficult to receive an Island-made film without preconceived notions, for better and for worse. Happily, in the case of Adam Perry’s A Small Fortune, it fits neatly into the 'pleasant surprise' category.

What struck me first after a viewing of A Small Fortune was how engrossed I became in the plot and how invested I became in the characters. For most of the film’s 91 minutes, I forgot that I was watching an ‘Island film’ (actually a PEI-Newfoundland co-production), no matter how much the place and its people are at the heart of its story. And that’s a very good thing. It’s a film that, first and foremost, is interested in fulfilling the requirements of a thriller. And it’s that commitment to genre that is key to its success.

A Small Fortune gives us antihero Kevin Doucette (Stephen Oates), an Irish moss farmer in Skinner’s Pond, Prince Edward Island (the film was actually shot in French River, PEI), finding it hard to make ends meet, not surprisingly. Kevin’s wife Sam (Liane Balaban) is pregnant and not making much money working as a home care worker. One day, while mossing (did I just make up that term, or is it a thing?), Kevin stumbles upon an answer to the couple’s prayers — a bag of big money washed up on the shore.

Being a thriller, the not-so-rightful owners of the money come looking for it, guns at the ready. And while avoiding the bad guys, Kevin also has to sidestep his suspicious spouse and a couple of local cops. True to the demands of a PEI neo-Noir, destinies are preordained, people die, and characters learn uncomfortable truths about themselves.

The notion of ‘traditional versus contemporary’ is also ever-present throughout A Small Fortune. It’s there in the outdated nature of Kevin’s work, and it’s there in local law enforcement, which is made up of by-the book Susan Crowe (Andrea Bang), who is both new to the police force and new to the community, and Jim Bradley (Matt Cooke), a local who knows how to local.

It’s also there in the character of Omer Tom (the late Island icon, Bill McFadden). He’s an Irish moss dealer, among other things, who knows that his time, and his kind, are coming to an end. After all, as he asks Kevin, what are you going to do when I’m gone?

Although it’s a question that resonates for the duration of A Small Fortune, the answer, of course, is in Kevin’s connection to PEI. Whatever your experience of Canada’s smallest province, it’s hard to deny its magnetic pull that is hard to escape for many. It is, in the end, a place that feels like “home” perhaps as only an island can, even if what you make of that connection is not necessarily logical.

That sense of place plays a large role in A Small Fortune, and the connection to it is reflected in the film’s spent fall setting. It’s a side of Prince Edward Island we don’t often see on film, one that is typically reserved for the lived experience of Islanders who reside in-province year round, long after the tourists have packed up and gone home.

What this means is that the Island is presented here in a way I’ve not seen it represented on film before. You won’t find any scenic drone shots of shoreline in A Small Fortune. Instead, the brittle, long grass of fall and the frigid shoreline set the atmosphere and the stage for what’s to come. Cinematographer Jeff Wheaton introduces Prince Edward Island as a fresh character — no mean feat, that — one that both hints at the beauty of the place and showcases its ruggedness.

The human characters in A Small Fortune fare just as well. Oates, Balaban and Hynes (the bad guy with the most screen time) create a tension-filled triangle, and at least two characters you care about. Hynes is absolutely terrific, but you don’t exactly root for him, after all.

Bang and Cooke are also excellent as, respectively, a fish-out-of-water cop trying to learn the ropes of small town policing, and the long-time cop who has the chops his new deputy desperately needs to develop. The casting of Bang is particularly inspired as her timbre belies the true nature of her character and emphasizes that fish-out-of-water quality.

There’s also nice work from Celia Owen and Sophia Bell as sisters Gussie and Josie. Comic foils at first, and perpetually mounted on ATVs, they also act as the eyes of the community, observing much of what takes place in Skinner’s Pond.

What can be said about Bill McFadden? Locally, he’s an icon, a larger than life presence that will be felt in the streets of Charlottetown, and throughout the province, for some time to come. A Small Fortune was McFadden’s last film (it’s dedicated to him), and he certainly brings life to Omer, though I wasn’t always convinced by his performance. When he nails it, however, there’s no doubt that anyone seeing A Small Fortune will come away remembering him. His turn as Omer Tom is absolutely a fitting tribute.

As Master of Suspense Alfred Hitchcock knew and frequently proved, a plot hole doesn’t matter if you’re wrapped up in the story, and like most thrillers, A Small Fortune has a couple. Almost a trademark of the genre, chances are that your engagement with the film won’t allow you to dwell there, with some pop psychology reasoning giving you enough of a rationale to ignore it.

Behind it all, I’ve been privy to some of the work that writer/director Adam Perry has put into realizing A Small Fortune, and it’s a testament to his belief in the project, and that of producers and Perry cohorts Jason Arsenault and Jenna MacMillan, as well as Newfoundland-based producer Mary Sexton, that this film haas made it to screens. Perry has some web work to his credit, including the 2009 feature-length web series Jiggers, but here, Perry has strived for more and achieved it. The evolution of his script and his direction are as solid as they come. He has made a film that we can point to and say, “This is what we’re doing in PEI.” On a personal level, it is absolutely a film I wish I’d made. 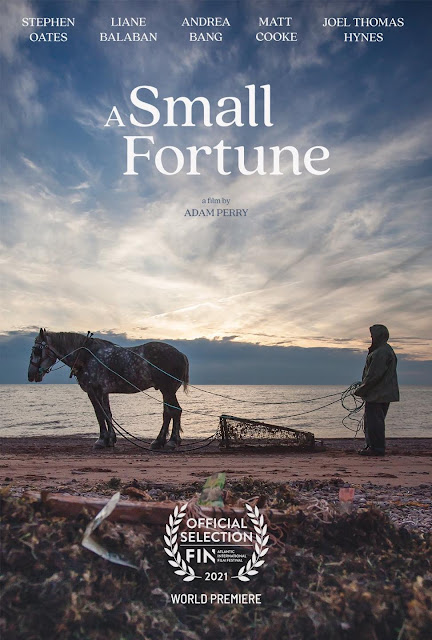