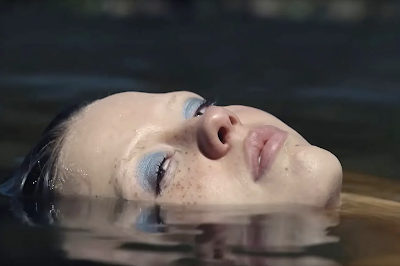 The newest movie on this list has also become something of an obsession for me. Just what is it about this movie that I connected with so strongly?

X suggests the horror films of the 1970s (and to a lesser degree, the 1980s) without unimaginatively ‘paying homage’ to them by ripping off key scenes. For instance, the setting, both era and location, suggests The Texas Chainsaw Massacre. The alligator mayhem and bayou locale suggest Tobe Hooper’s wild Eaten Alive. A scene of ocular trauma suggests the Lucio Fulci flicks of the 1980s. They bring us back to the time period in which X is set, but they don’t just ape what’s come before.

The cast, especially Goth, Ortega, Snow and Campbell, are outstanding. They manage, with an immeasurable assist from director West’s script, to create memorable, surprising, and endearing characters. Goth, in particular, stands out by taking on two substantial roles here.

And that shot of the alligator — if you've seen X, you know which one — sublime.

There is also more than one way to interpret the film’s treatment of the elderly. I think whatever interpretation a viewer brings to the film says more about the viewer's thoughts about sex and aging than it does about the filmmaker's take on the matter.

To some, the idea of sex between people in their 80s is grotesque, it’s black comedy, it reflects a fear of the elderly. I don’t see it that way here. I was shown a too often neglected side of aging, bloodily awakened by assumptions that sexual needs and desires disappear as we age. It’s not (always) so, and to assume so is dangerous.

In the end, what I love about X is that, for me, it delivered. It’s a horror film with thrills, ideas, surprises, and interesting characters. It’s a film that communicates the connection between sex and death — one of horror’s key themes — without having to hit the nail on the head with lesbian vampires drooling blood down their cleavage (not that there’s anything wrong with that).

Reportedly, West has two more X films in the works. The next, Pearl, is set before the events that unfold in X, and I’m guessing the third will take place in the present day. Whatever the case, you can be sure that I’ll be there, anxious to experience more of what West has to show us.