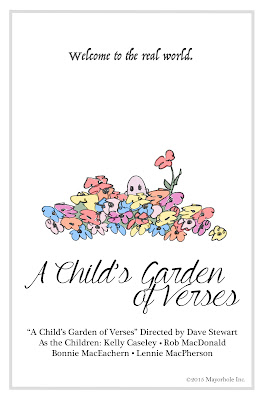 After "The Rehearsal"(no nod to Bergman intended), I went back to something I'd shot years ago, but hadn't completed. I first filmed a version of "A Child's Garden of Verses" in the greenery of The Dunes Cafe & Gallery in Brackley Beach, PEI with Kelly Caseley, Cynthia King, Rob MacDonald and Ed Rashed, on 16mm and MOS ("motor only sync"). The plan was to bring the actors into the Island Media Arts Co-op offices at a later date to record their dialogue. That never happened, and in the years since filming, the film itself disappeared. This past summer, we went back to The Dunes, and I shot the new version that you can watch below with Kelly, Rob, Lennie MacPherson and Bonnie MacEachern, assistance from Dave Morrow, and musical accompaniment from Rob MacDonald.