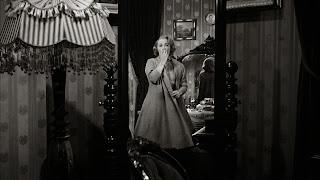 Where to start with Psycho? I suppose it make sense to start by stating that Alfred Hitchcock is my favourite director. He was a man who understood both fear and moviemaking. For me, his use of a camera to tell a story or to explore a theme is unmatched. Add these convictions to the fact that Hitchcock was at the peak of his ability as a director when he made Psycho, and we get a horror film that I believe is flawlessly made, save for the clunky explanation scene at the end. Much like the original Invasion of the Body Snatchers and its studio imposed opening and closing that softens the film's thrills, I like to think of Psycho without this scene. Luckily, the coda that follows it is immensely creepy. Over the years, however, Psycho’s ability to scare has lessened due to many factors including familiarity and conceptual appropriation, but we’re still left with an exquisitely made classic that explores desperation, paranoia, and a host of other truly dark subject matter like nothing that came before it.