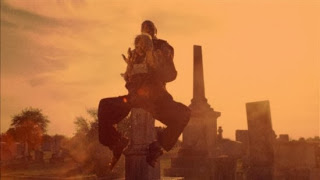 When I finally got the opportunity to see The Texas Chainsaw Massacre on a murky VHS tape, surrounded by a group of friends, I admit I didn’t know what to think. As a nine-year-old when it was first released, I knew TCM by reputation and by the images its sensational title creates. I also knew about about it from my mother’s student admin assistant who told me too many details (which I’m sure is a form of child abuse; trust me, she succeeded in scaring me.), and from TV ads that were absolutely terrifying to me. During this first viewing as a teenager, however, I was at a loss. I remember being completely disturbed by the hitchhiker, stunned by Kirk’s demise, put on edge by Pam’s impalement, and repulsed by the dinner scene in general, and by Grandpa trying to sledgehammer Sally in particular. After many subsequent viewings, what I’ve come to believe about The Texas Chainsaw Massacre in all its ferocious horror beauty, is that it’s not a movie you watch, it’s a movie you process.