This Image is Disgusting and Shouldn’t Be Posted

Last night I re-watched Robert Hartford-Davis’ 1968 sleaze fest Corruption. The new cover art from Grindhouse Releasing accurately reflects the movie. It’s a toned down version of the art included inside the Blu-Ray package. The cover version, pictured here, features a deranged Peter Cushing with a straight razor at the throat of a female victim with the leering image of his (in-film) wife looming in the background. In a plot device that could only exist in the wild world of exploitation (or the rarified world of international arthouse sensations; see Georges Franju’s Les yeux sans visage), Cushing is in search of pituitary glands to ensure the success of his wife’s facial reconstruction surgery. The film is silly, sleazy, and extremely entertaining for fans of sleaze cinema.

So, the day after viewing Corruption, I posted the following: 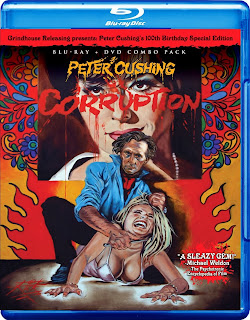 After a few positive comments from cult movies fans (all male), a friend who was formerly a key staff member of the provincial Advisory Council on the Status of Women, and a friend whose opinion I respect, commented, stating, “This image is disgusting and shouldn’t be posted”.

Reading the comment, it felt like the bottom of my stomach had dropped out. I knew my friend was commenting from a feminist perspective, and I consider myself feminist too. I responded by saying, and I’m paraphrasing here, that I respected my friend’s opinion, I’d delete the post (I did), but that I thought she was seeing only one thing here. Then, of course, I began to ponder the matter.

Was I only seeing one thing here? The answer is an unqualified yes. The fact of what was in the lower half of the cover art didn’t cross my mind. I was focused on the post and not the image which I’d sort of accepted as just an, I don’t know… accouterment.

I love horror movies, but I abhor real violence. I don’t believe that imaginary violence causes real violence, but I do believe that how we discuss and joke about groups and individuals that have any kind of difference from ourselves creates an overall belief system about others that can have a real life, negative effect.

As a horror fan, I accept the Blu-Ray cover art as part of the language of horror, and in this case, I didn’t spend much time considering the gender of the players involved. Admittedly, I don’t mind ruffling a few feathers. Sometimes I enjoy it. In fact, I like to be offended myself sometimes. Why is that? Because it forces me to take a step back and say, “Why do I find that offensive?” It’s a chance to understand myself better, and I make it a practice to do this every time I feel offended. To me, it’s something worth analyzing, even if the answer seems obvious; it isn’t always.

But I don’t believe in promoting hate. In all honestly, whether this means I’m a prime candidate for that dubious thing known as sensitivity training, or whether I’m right, I don’t believe that’s what I was doing by posting that image.

Perhaps its simply a question of venue, and Facebook may not be the place to post these kind of things, but I want to be able to connect with fellow horror fans from around the world there. And so that’s what I’m doing here. I’m posting a link to this piece on Facebook, and I’m tagging a few people specifically – most of them women - because I want to hear what they have to say about this issue in general, but not the Corruption cover in particular. You up for it? Let’s have a levelheaded, respectful dialogue about it.