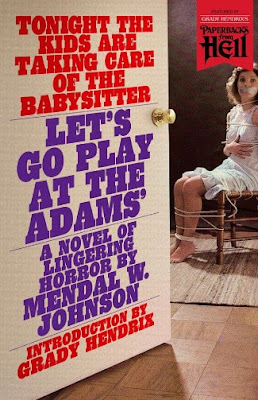 Mendal W. Johnson had only one novel published - Let’s Go Play at the Adams’. Two years later, he died as a result of alcoholism.

Based very loosely on the real life case of Sylvia Likens, Go Play tells a story that, quite honestly, based on description alone, is anything but appealing.

Barbara, a twenty-year-old college student, takes a job babysitting the two Adams kids — 13-year-old Bobby and 10-year-old Cindy — for two weeks while their parents are in Europe. One morning, she awakens to find herself the captive of the Adams kids and three of their teenage friends.

At the age of 56, while I still like reading things that push the envelope, I’ve had enough of this kind of story. For those of us looking for something shocking, The Last House on the Left and I Spit on Your Grave are rites of passage, for better or worse. Hopefully, we come away from them with empathy, or some sort of catharsis, maybe just the feeling that “we made it through”.

What will get me to risk feeling that human beings are shit for a few days, however, is the reputation of the work in question, and that was the case with Go Play.

Out of print for many years. Grady Hendrix and Valencourt Books have brought Go Play back into circulation via their Paperbacks from Hell imprint. Since it was first published in 1974, the book has been one of those holy grail publications that wasn’t always easy to get your hands on, and that had a reputation for being both a difficult read, but well worth it. After having finished it just last night, I agree that it’s both.

The beginning of the novel very much has the feel of the time it was written. It’s almost like an S. E. Hinton novel co-written by a sociopath.

I don’t want to say too much about what happens in Go Play — it’s pretty much a single scenario that plays out over a few days and gets progressively worse — but I will say that it’s the manner in which it’s written that gives it its true power.

It's horrific without being exploitive. The cruelty, the nudity is not there to titillate, it's used to describe, to add pathos. Johnson also very much gets into the heads of all six of his primary players, and makes them seem very real, both as individuals, but also when the young captors act as a unit under the guise of the Freedom Five. This makes the scenario, the dynamics, and everyone’s actions all the more believable.

It’s also very much a story about hope, despair and the apathetic (fatalistic?) nature of cruelty. In fact, it was this hope-despair dynamic that had me hooked by the novel’s midpoint, and led me to cram-read the second half of the book in one sitting. Much like the captive Barbara, I just had to know what her fate was going to be.

At its end, the book transcends everything that’s come before it. I don’t mean that in the pejorative sense that many people use when writing about horror novels. I mean that it veers into a type of poetry, almost taking the reader into the realm of Kubrick’s 2001 ending.

As a result, Let’s Go Play at the Adams’ is absolutely that difficult but nastily worthwhile read that I wouldn’t hesitate to recommend to the right people. You know what I mean. This is a novel that I don’t think I’ll ever forget.